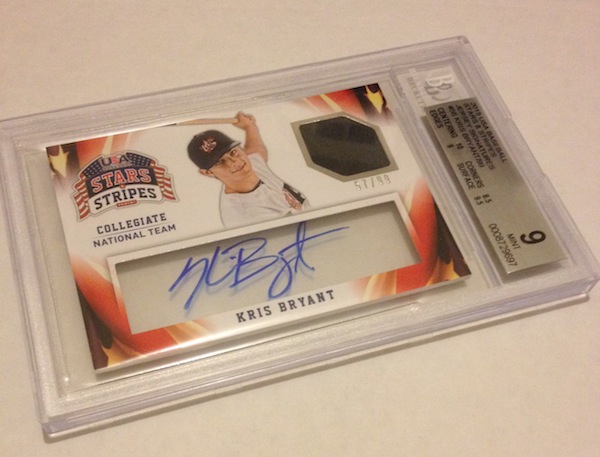 2015 USA Baseball Stars and Stripes Jersey Signatures #56 /99 Kris Bryant (above)
I pulled this one from my first box of Stars & Stripes this year — a pleasant surprise considering he’s pretty much been The Guy among rookies this season. Since I pulled it, he’s been promoted and smacked 12 homers with 51 RBI in 79 games and been named an All-Star, too. Getting memorabilia cards graded can be an extra challenge because they simply get handled more during manufacturing and more things can go wrong, but I figured this card was a must for a slab, anyway.
Pop Report: It’s the only copy — of the 99 copies of this card — that’s been graded. 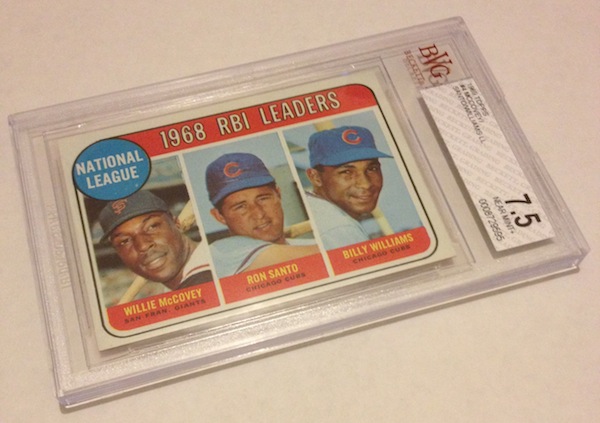 1969 Topps #4 NL RBI Leaders (Willie McCovey, Ron Santo, Billy Williams)
With three Hall of Famers on the front and a price tag at less than $10, this card has a few ways it might appeal to collectors. Simply put, leaders cards from the 1960s are a great way to collect big names on a small budget. When I found this card in a bin at my local card shop with its razor-sharp edges and super-bright pink back, I knew I needed to get it graded. The centering and some very minor chipping — with the missing fibers found inside its penny sleeve — brought its grade down a tad but it’s a card that looks better than its grade says if you ask me. (I had thought it would get an 8 — something that’s not that easy in vintage.)
Pop Report: While 38 copies of this card have made their way into a BVG slab, only six have a better grade than mine does. The highest is an 8.5. 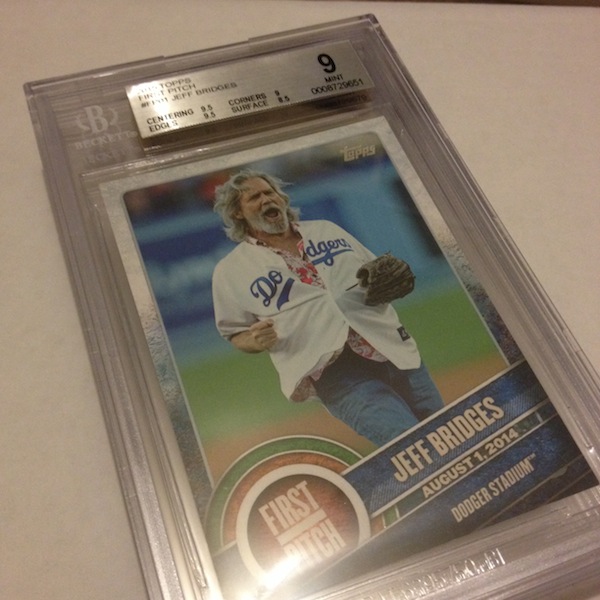 2015 Topps First Pitch #1 Jeff Bridges
When I saw these celebrity ceremonial pitches were going to be found in packs of 2015 Topps, I knew they would be a big deal simply because of their unique twist on something seen pretty regularly in baseball but not on cardboard. This Hollywood veteran has been in many films but I like him best as The Dude in The Big Lebowski. This photo carries a bit of that spirit if you ask me — and that’s why I wanted my copy in a slab despite it being an inexpensive card. (Had that card been marked an 8 there would have been a world of pain. Or something.)
Pop Report: Eight total cards from the set have made their way into slabs — and my card is trumped by a BGS 9.5 out there somewhere. No First Pitch cards have received a perfect 10 score. 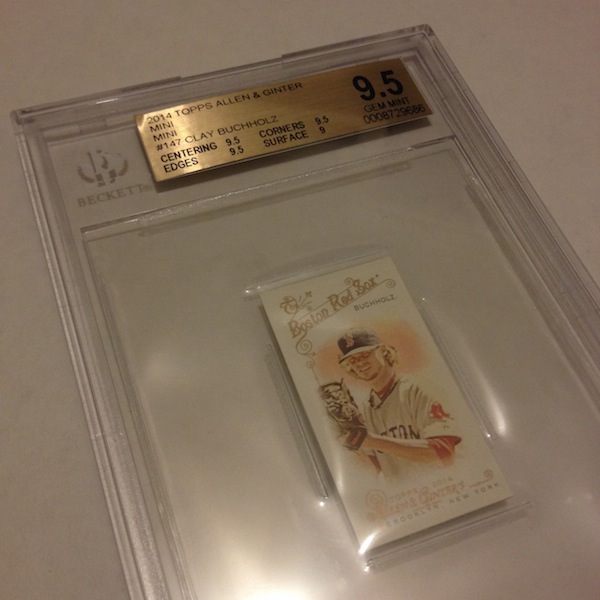 2014 Topps Allen & Ginter Mini Mini #147 Clay Buchholz /1
If you know what this is and where it came from, then you know that I ripped into a double Rip Card and a Mini Rip Card to pull this … and it was not a player I was hoping for inside. Nonetheless, this tiny card is a mere 2 inches tall (if that) and is a one-of-a-kind creation. It should have been a Nick Swisher, but either way it needed to be in a slab.
Pop Report: It’s the only copy of the card made. Only four total Mini Minis have been graded — and there are no 10s. (The others graded are Roberto Clemente, Adam Jones and Bo Jackson.) 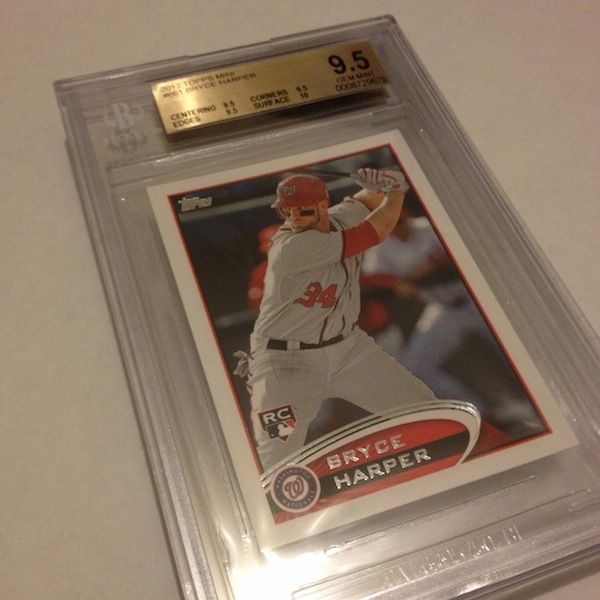 2012 Topps Mini #661 Bryce Harper
With Harper’s strong season so far, I figured I would get one of his Rookie Cards — probably my favorite one — into a slab. Of the three I own, I examined them closely and selected this one to be encased. The 9.5 surprised me — I figured a BGS 9 — but I’ll take it. At some point, it’s two brothers will get slabbed up, too.
Pop Report: A total of 68 copies of this card have been slabbed with only five getting the perfect 10 grade. A heavy majority of the cards — 56 copies — have gotten this grade and the other seven copies all got a BGS 9. 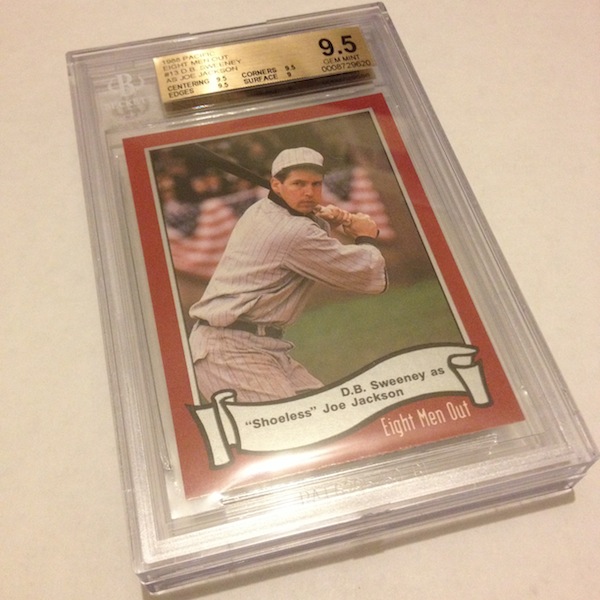 1988 Pacific Eight Men Out #13 D.B. Sweeney as “Shoeless” Joe Jackson
Probably a decade ago, I went on a major baseball DVD kick and Eight Men Out was one film that ended up in my DVD player for weeks at a time as something playing while I sorted cards or wrote stories. At one point back then, I found a bulk lot of 25 factory sealed sets on eBay and a single $25 bid later I had even more cards to sort. I didn’t expect to win them, but I did. I cherry-picked the key cards from these sets for some BGS candidates — tougher than you might think for 1988 and simple packaging — and figured I’d start with the best player in the 1919 Black Sox lineup.
Pop Report: This is the first copy of this card graded by BGS — and it’s a half-grade higher than the only other card from the set (Charlie Sheen) that’s made it into a case. This won’t be my last.

Also graded this time but not shown: A 2015 Topps Heritage Nick Swisher gum stain (BGS 9) and a 2010 Topps WWE Blue Maryse (BGS 9). Both are the only copies of those cards ever slabbed by BGS.