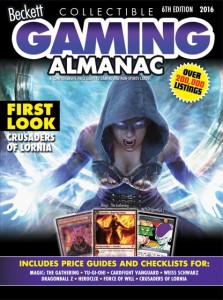 For the past five years, Beckett Media has produced its annual Gaming Almanac, which provides detailed checklists and pricing of collectible card games and non-sports cards for collectors and dealers alike.

Now, the 2016 Beckett Gaming Almanac is set for release and it could be our best effort to date.

Like the non-sports almanac, the new gaming almanac will follow a bit of a different format. It consists of 360 pages from cover-to-cover and will feature 7 separate sections. They are as follows:

All of the sections will have their own unique sort order and will include extensive information on booster boxes, booster packs, release dates, updated headers, and updated multipliers.

There will also be a sneak peek at the new product being released by Eternal Relic Games, 2015 Crusaders of Lornia.

The 2016 Beckett Gaming Almanac will be released on October 16. Winners of the Dragon Ball Z products will be chosen on the same date. Good luck!

Who is Latavius Murray and why does ...