Dragonball Z Evolution features some highly competitive and exciting cards. This week I want to touch on 5 cards from the set that I feel will help many players improve their decks. 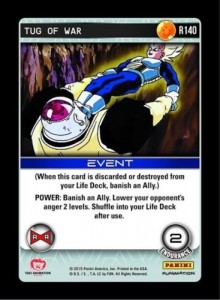 Tug of War is a new event style card that allows you to remove an Ally from play, as well as controlling your opponents anger. On top of that you get to shuffle it back into your life deck after you use it. The card also has major upside with 2 endurance and the ability to still banish an Ally if it is discarded or destroyed from your deck. Expect to see this card in many decks, especially Namekian Piccolo. 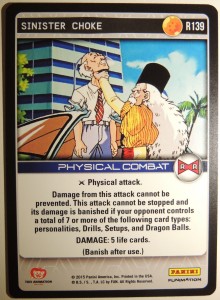 Sinister Choke is a Physical attack that does a direct 5 life cards to your opponent, and if it hits you are guaranteed a critical hit because the damage cannot be prevented. The final effect states, if your opponent controls 7 or more of a specific card types choke cannot be stopped. This can be devastating for many blue and black style decks that like to use allies and setups. I managed to test this card out myself at the Texas regional over the weekend and it means business. 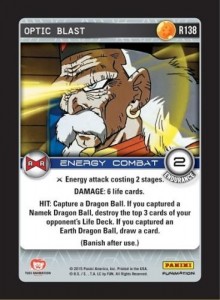 Optic Blast is another freestyle card that can find its way into many different decks. Optic Blast is an energy attack that puts out 6 life cards of damage and has the hit effect to steal an opponent’s Dragon Ball. This effect his huge against the Namekian Knowledge Mastery because it bypasses the masteries protective effect. Not only do you get to capture a Dragon Ball but you have a chance of capturing 2 if you hit critical damage. Finally, Optic Blast has endurance 2 which makes it an overall fantastic card that everyone should consider playing. 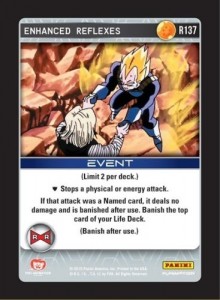 Enhanced Reflexes is a card limited to 2 per deck, however the effect of the card is extremely powerful. It is an event style card that stops a physical or energy attack, and if the card was a named card it deals no damage and banishes it after use. This is the only counter card to Krillin’s Destructo Disk and should be considered a staple for almost every deck. 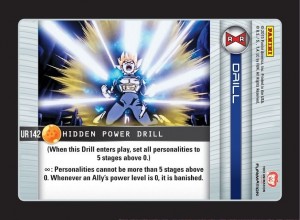 For the number one spot we have Hidden Power Drill. When this drill enters play it sets all personalities to 5 stages above 0, and then states no personality can go above 5 stages. This card has potential to warp formats and can only get better as the game moves forward. This is also the first real stage lock card and is a huge blow to what was already an energy attack heavy format. On top of being a huge restriction to players the drill also banishes Allies once their power level hits 0. Expect to see this card carry a heavy price tag for a while as it only comes as an Ultra Rare.

Let me know what cards you enjoy from the new set. Also be sure to check out the full checklist and price guide of Dragonball Z Evolution in our online price guide.