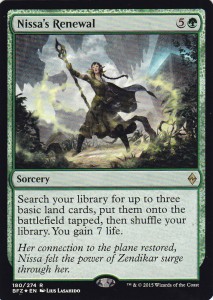 Hello fellow spell slingers! Today I am coming to you with my tournament report from the Battle for Zendikar Pre-Release! In this article I will cover the rare cards I pulled, provide a deck list of what I ran, and a quick synopsis of each round. Before I get started, I wanted to say that this limited format is very fun to play and I look forward to playing it again once the set has officially released. 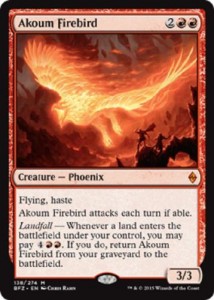 Like in many sealed formats rares can be a huge bomb in a game, Battle for Zendikar is no exception to this. Below is the list of the rares I pulled in my kit.

I managed to snag the Firebird in my 4th pack, although it may not be a high dollar card, the card is still very good for sealed play.

Ulamog was my first rare in my kit, and I was very thrilled to see the giant Eldrazi. This sealed format is slower than the previous Magic Origins one; therefore, bigger creatures have a chance to come out and go to work. 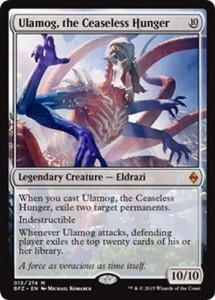 Once I finished opening everything I got to work on building my deck. I had reviewed the spoilers a little bit to look out for key cards that could make my deck better. Here is what I ended up going with

I was considering trying green and either blue or red, however this seemed like the strongest combination of cards I had. I did manage to pull two Sheer Drops for white but I had no other white cards to utilize effectively. The star of this deck aside from Firebird, was Valakut Predator. The landfall trigger on him is very strong and gets over a lot of the three toughness creatures in this set. Having three of him was my main reason for going into red. The biggest weakness this deck had was dealing with enchantments, which is going to be a struggle for most decks outside of white. There really isn’t much enchantment removal in the set. 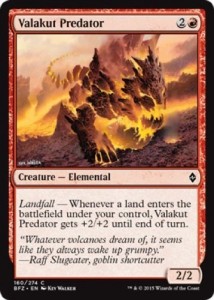 Round 1: Against Black, White, Blue Deck

The first round I won the dice roll and chose to be on the play. I had to mulligan down to 6 and got to take advantage of the new mulligan rule. From there we both passed our first two turns with just playing land. On the third turn, I had Valakut Predator come down, and he answered with a Cloud Manta. Turn 4, I played a land get landfall and swing in for 4. Second Main phase I play another Predator and Pass. We trade blows back and forth a few turns until I top deck into Akoum Firebird for the finishing blow. Game 2, I start on the draw and keep my opening hand. I start off with a Mist Intruder and he starts to have a mana drought. I continue pushing with my Intruder and ingest a key land drop he needs. Eventually, I kept pushing board presence and he conceded due to only having 3 land through the whole game.  W

The second round game is very close. My opponent pressures me with a lot of flyers and drops a Defiant Bloodlord. I manage to pull a Rush of Ice and freeze the lord for a turn while swinging in with my elemental land creature. Next turn, he passes and I finish him off with my elemental land and Predator. Game 2 I get out a Firebird on turn 4 and he has no answer for it the entire game. I put him on a fast clock and end it with a Firebird/Sure Strike combo.  W

Round 3 Both games I had trouble with getting my deck working. My draws were not very good and I only got out 1 Predator each game and didn’t see any Firebirds, even after two Anticipates. It was a swift 2-0 for my opponent. L

The final round I play a similar deck to round 3. This go around I manage to get my deck working. His deck is filled with white flyers and strong enchantments. He brings me down all the way to 1 life when I manage to top deck my 10th land to drop Ulamog. I remove his 2 flyers to save me a turn. His next turn he plays another flyer and passes. On my turn, I ask how many cards are left in his deck, he counts twice to be sure…exactly twenty! I swing in and we go to game 2. Game 2 I am put in a very similar situation, I have Ulamog in hand and he top decks one of my creatures, time walking me for a turn and preventing me from grabbing my tenth land. He swings in with his flyers to go to game 3. Game 3 we both have slow starts until he drops Plated Crusher which is a 7/6 Hexproof/Trample death behemoth. I respond back with Ulamog’s Despoiler who gets the exile trigger off and comes in at a 9/9. We are at a stand-still for a few turns until he top decks an enchantment that gives his Crusher flying. From there the game is over for me. The Hexproof protected his Crusher from all my outs. Overall, this round was my favorite and getting Ulamog off was very fun and crazy! L

At the end of the tournament I managed to squeak into the top 8 and get 2 extra packs for making it. The tournament was a blast and I can’t wait for the set’s official release. There were not any expedition lands pulled at my event, but one guy did manage to pull a foil Gideon! I hope you all enjoyed this tournament report and if you have any questions feel free to comment below.

Also, be on the lookout for the new 2016 Beckett Gaming Almanac so you can check out the full checklist for Battle for Zendikar!