Ronald Acuna Jr. cards have been on the radar for a while now. But in recent weeks, as the young Braves outifelder reached the 30-30 mark (with over a month left in the season), things have really picked up. One in particular is leading the charge. The 2018 Topps Series 2 Ronald Acuna Jr. SSP.

The variation, which is #698 on the checklist, is commonly referred to as the “bat down” card as there are a couple versions that are very similar in appearance and easy to mix up. 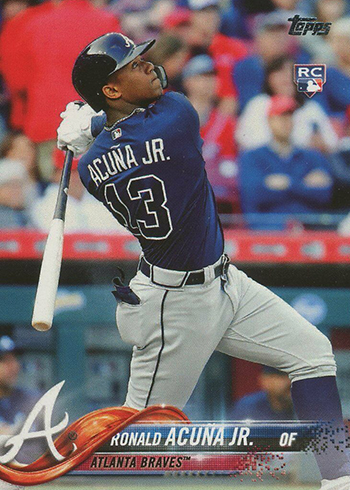 A year ago, the 2018 Topps Series 2 Ronald Acuna Jr. variation could be easily found for around $30. As the season came to a close, prices started to rise to about $50-$60, about where they were when the card showed up as a surprise in Series 2 packs.

The first significant jump came around the start of 2019 where prices were in the $100 range. As early as a couple of weeks ago, you could still find them on eBay for about $150.

Recently, they’ve been surging in August to the point where now you can expect to pay around $300 for one of the short prints.

Because the card is a variation, it’s not a traditional Rookie Card. Rather, it’s an insert. The RC distinction goes to the 2018 Topps Update Ronald Acuna Jr. #US250, another card that’s seen big jumps recently.

Still, this is Acuna’s first card in the flagship Topps set, something that’s steeped in tradition. That’s a big deal with a lot of collectors. The fact that it’s a tough pull is another big reason. Exact odds for the Acuna and the set’s other late addition variation, Gleyber Torres, aren’t known. However, it looks like they’re about one per case.

For a flagship release, that makes it tough. However, this isn’t a scarce card. Flagship sets have some of the biggest of the season, although Series 2 is usually smaller than Series 1.

But that, too, is a draw. The Acuna comes from a set with mass appeal.

For those who are priced out of the “bat down” market, there’s a more affordable option with the same #698 on the back. Topps included different versions of both the 2018 Topps Series 2 Acuna and Torres cards in all of the year’s factory sets.

It has a similar photo only with the bat pointing up. 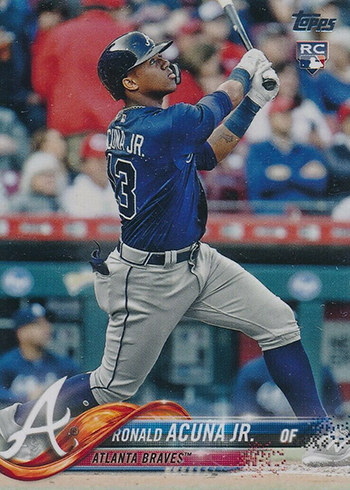 Prices on the 2018 Ronald Acuna Jr. factory set variation are not nearly as high, currently fetching about $25-$30 online. 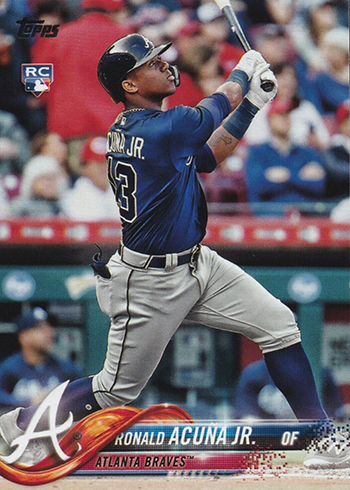 The way to tell the difference between the factory set version and the Topps Update RC from the front is the position of the Topps and RC logos at the top of the card. They’re on opposite sides of each other.

There is a “bat down” alternative that’s much more affordable. 2018 Topps Walmart Holiday Snowflake recycles the variation image, adding a snow-filled border. The secret’s out on this card as well, with prices more than doubling on the secondary market in the last few weeks. 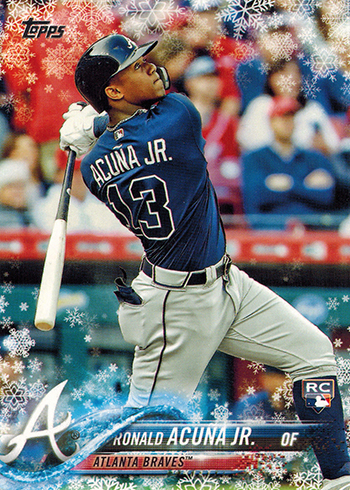 It’s early to tell whether these prices are sustainable. That said, Acuna is proving to be an elite baseball player. And at just 21-years old, there’s the potential for a special career. And with prices like these, it looks like many are speculating on just that.