This time Isiah Thomas was on the other end of a key assist.

According to Heritage Auctions, Thomas – an NBA Hall of Famer and one of the game’s 50 Greatest Players – was reunited with the 1984 NBA All-Star Game MVP trophy he won. It had been stolen from a trophy case while on loan to his high school. 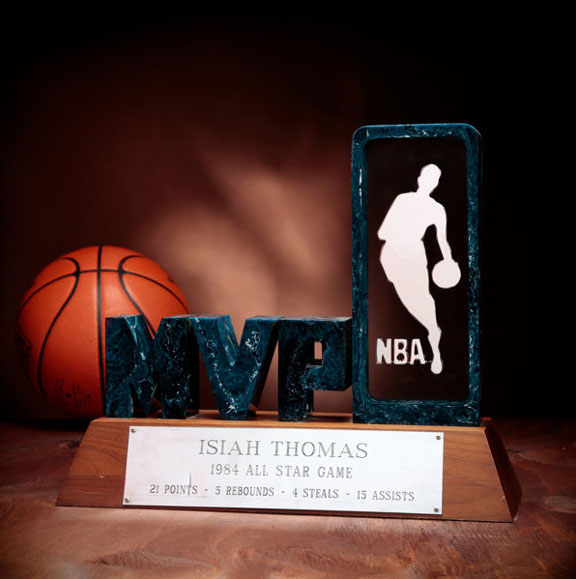 The award was originally listed in Heritage Auctions’ Summer Platinum Night Sports Collectibles event that is taking place this weekend, August 29-30. But Heritage pulled the trophy from the auction after Thomas himself reached out to the auction house on August 11 to inform them the trophy was among several items he had loaned to his alma mater, St. Joseph High School in Westchester, Ill., in honor of his his high school coach, the late Gene Pingatore.

Once they reviewed and verified the information Thomas had provided, Heritage removed the trophy from the auction.

With the consent of the Westchester Police Department, Heritage was able to send the trophy back to Thomas this week.

“It came as a shock to discover the MVP trophy had been stolen from St. Joseph,” said Chris Ivy, Heritage’s Director of Sports Auctions. “But we are pleased and proud to have been able to return the trophy to the man whose name is inscribed on the award.”

According to a release by Heritage, Westchester police said this week that Peter Kiefor had consigned the trophy to Heritage and was unaware of having been stolen when he bought it. Kiefor called police when he learned of Thomas’ claim. 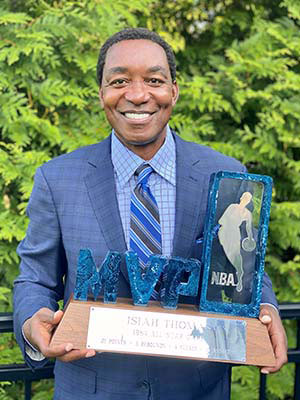 The trophy was back in Thomas’ hands Thursday.

“I am very happy that my 1984 NBA All-Star Game MVP Trophy has been returned to me, and I want to thank Heritage Auctions, the Westchester Police Department and St. Joseph High School for all of their hard work and professionalism throughout this process,” Thomas said Friday. “This trophy is a special piece of memorabilia for me and my family, and it remains something that I am very proud of being awarded during my playing career.”