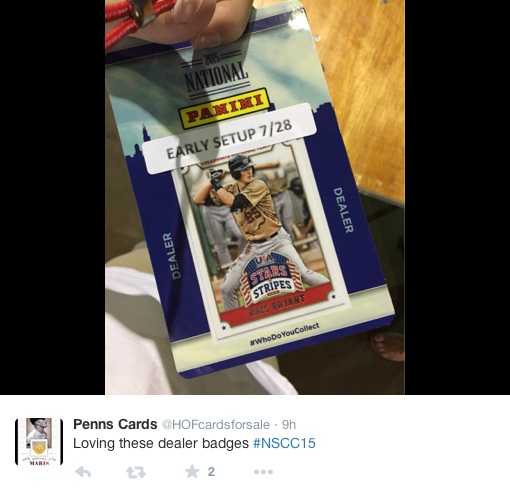 The Show of all Shows began with a group-breaker evening Tuesday night inside the Donald E. Stephens Convention Center in Rosemont, Ill., and that’s just one example of how there’s even more action online than ever before for the National Sports Collectors Convention.

Thanks to technology and group-breakers, you can buy new cards straight from the show floor. Thanks to Twitter, you can already go behind the scenes with insiders as they prepare their booths for the biggest show of the year, which opens Wednesday evening with a VIP reception.

Highlights from Tuesday (and before) included breakers breaking, collectors traveling and, it seems, many more readying themselves for the 36th-annual show event while tweeting with #NSCC15 and #NSCCshow. (Look for even more here on Beckett.com/news as the show unfolds in the coming days and be sure document your own journey if you’re there with those hashtags. You might see yourself right here, too.)

See plenty of the preparation and some of the breaker highlights … after the jump.

The truck is unloaded and the sign is put together and ready to be hung! #nsccshow #nscc15 pic.twitter.com/bsQH7hWJ9R

NSCC tip: Don’t wear nail polish if going through dime boxes. It will chip off. #nscc15

Who is going to the @natsportsshow? #NSCC15 #NSCC #nsccshow #Nationals #collect RT

Called in sick this morning. I expect the #NSCC15 crowd to make me feel better with awesome updates. — View from the Skybox (@VFTSB) July 28, 2015

Only 19 people are going to #NSCC15?!? Cmon @natsportsshow, you guys are going, right?

Safe travels & have fun at the Natty, my fellow Collectors. Post some pics for us less fortunate ones. #NSCC15

Keep an eye on @beckettmedia and @beckett_grading on Twitter along with editors @chrisolds2009, @stephen_laroche and @tradercracks as they explore the show beginning Tuesday night. Also look for even more on Beckett Media’s Facebook page, while Beckett Grading Services vintage grader Andy Broome will be keeping tabs on interesting cards found in BGS.

Chicago’s hometown heroes at the 2015 National