Sometimes history happens with a lot of drama. Other times, big moments are much more quiet. When Alyssa Nakken stepped onto the field as the San Francisco Giants’ first base coach in the second half of a July 20 exhibition game against the Oakland Athletics, there were no fireworks or sweeping soundtracks. There weren’t even fans in the stands. But history still happened as Nakken became the first female on-field coach a MLB game. Nakken’s achievement has been commemorated with a limited edition Topps baseball card.

Alyssa Nakken, the first female coach in MLB history, is coaching first base for the @SFGiants 🙌

It’s part of 2020 Topps Now Spring Training. Available for 24 hours through their website, it shows a mask-wearing Nakken during the history-making game. 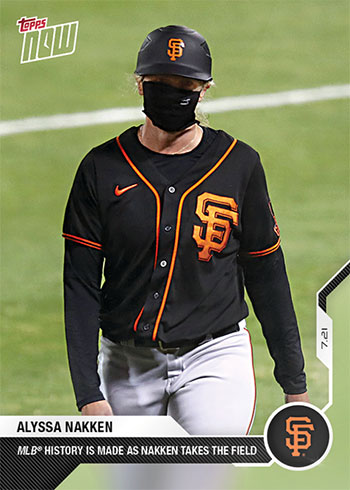 The print run for the card will be based on the number ordered during the sales window, which closes during the afternoon on July 22. Like other Topps Now Baseball singles, cards cost $9.99 each with bulk discounts also available. There’s also eBay where collectors can buy the card from dealers for closer to $5 during the pre-sale window. 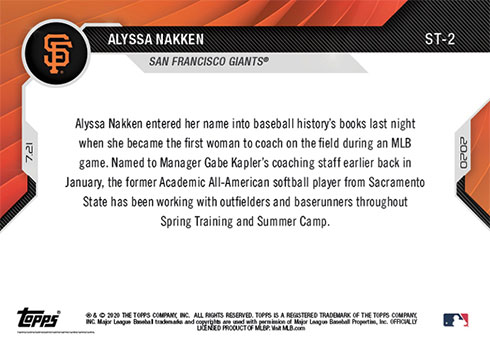 Nakken became a member of the Giants’  coaching staff in January. She started with the team back in 2014 as an intern.

Which Tight End Would You Collect? – ...