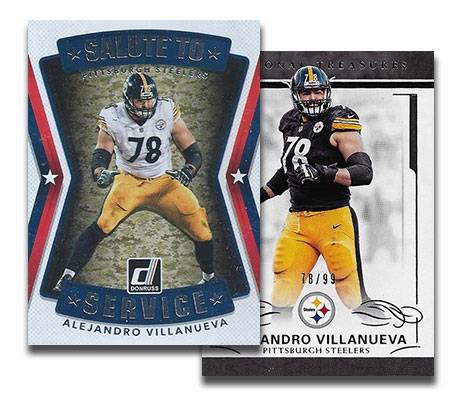 Week 3 of the NFL season brought with it no shortage of storylines. It’s safe to say Pittsburgh’s Alejandro Villanueva had no intention of being in the spotlight except for his on-field play. But at a time of charged emotions and big discussions, the Steelers lineman and former Army Ranger became one of the week’s biggest stories. With that came some other implications.

His jersey became a top seller (he’s donating his proceeds from the sales).

Alejandro Villanueva cards have also spiked in a big way.

It was announced by the Steelers that the team would not take to the field during the anthem before their game versus the Chicago Bears. Instead, they would stay back in the tunnel. Villanueva stepped out from the tunnel while the anthem played, the only player on his team to do so. There were no intentions of any kind, yet the act was interpreted many ways.

In the process, Villanueva’s story was told. People learned of his military background and his three tours of Afghanistan. Interest in Alejandro Villanueva cards followed, with an especially pertinent insert leading the way.

When it comes to football cards and collecting, linemen are often overlooked. They play an important role on the field, but card collectors are usually most interested in quarterbacks, running backs and receivers.

It shouldn’t be a surprise, then, that Alejandro Villanueva doesn’t have a lot of cards. He made his NFL debut in 2015 but didn’t get his first cards until late in 2016.

The 2016 Panini National Treasures Alejandro Villanueva is his Rookie Card. Because just 99 copies of the base card exist, there aren’t a lot of them out there.

He is also on the print-on-demand 2016 Panini Instant Football checklist as part of a postseason team set. A total of 112 copies exist.

The Alejandro Villanueva card drawing the most attention, though, is a 2017 Donruss Football insert (he’s not even in the main part of the set).

2017 Donruss Salute to Service is a 20-card set dedicated to players who have served in the military.

At the start of September, Villanueva’s card was selling for not much more than $1. Basically, it was a common in the insert set.

Likely, these recent prices are extremes that are not likely to be maintained over the long-term. That said, its direct connection to Villanueva’s story have given the Salute to Service card some background and heightened real-world context. This should keep the price heightened somewhat compared to where it was just a short time ago. 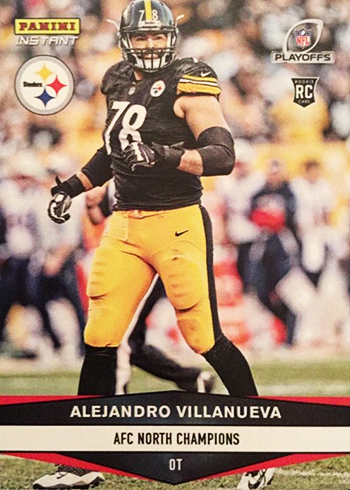 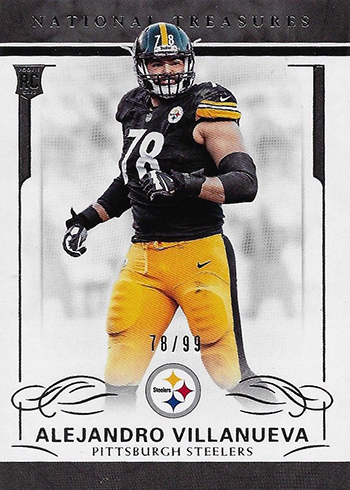 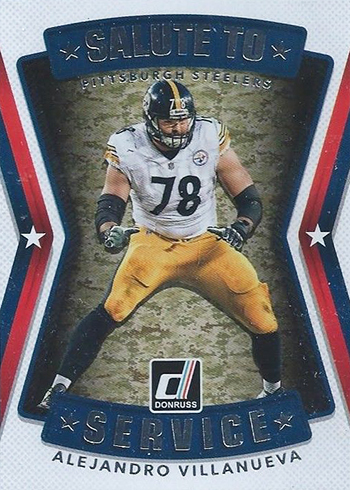