New Podres: A sign sticker autos can be good? 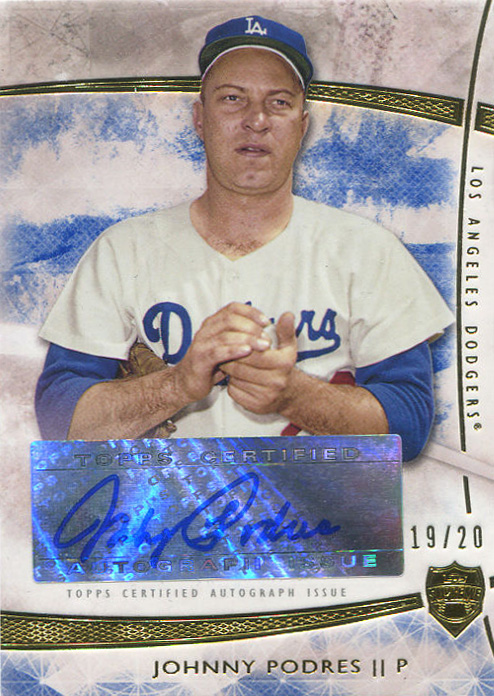 This year’s edition of Topps Supreme baseball cards arrived in hobby shops on Wednesday with the newest lineup of  autographs from today’s players, future stars and past greats.

One of them? Former Los Angeles Dodgers pitcher Johnny Podres — a lefty who won 148 games in 15 seasons as well as three World Series rings.

It’s actually not the first time this has happened, but it’s something we have seen more of in recent years with players such as Hall of Famer Gary Carter. He’s not in this one, but two legends also on this year’s Supreme checklist? How about St. Louis Cardinals great, Stan Musial, who died in January of last year, and another Hall of Famer, Duke Snider, who died in 2011. Another posthumous autograph in this one — albeit from very different circumstances — are a few cards signed by Cardinals rookie Oscar Taveras, who died in an automobile accident on Sunday. (This one had already been packed out and was in transit before that news.)

We all know that many collectors don’t like stickers for their autographs but without them cards such as this one and the Musial in this product would not be possible — at least without a cut autograph.

Is this a scenario where sticker autographs might be more acceptable for collectors who don’t like them? Is it a sign of good inventory management from card companies?

Maybe, maybe not. For me, I see it as a plus — though I’d probably also wonder why they hadn’t been used before.

Let us know what you think in the comments below.