Panini America is bringing back Crown Royale Football for its second installment under the re-branding of the set.

What started with Pacific in the 1990s, Panini has added new elements to make the product its own.
One of the big successes from last year’s product were the Rookie Silhouettes, which returns with all on-card autographs.

Due out in October, Crown Royale Football will have a hit – autograph or memorabilia card – in each of the four packs. In addition, there should be four Rookie Cards, one parallel numbered to 100 or less and seven inserts in each hobby-exclusive box.

“The Rookie Silhouettes design that debuted in Crown Royale Football last year really helped re-launch the brand with a huge bang,” said Ben Ecklar, Panini America’s Director of Product Development in a release. “When the 2010 product season ended, those cards stood tall as some of the most striking of the entire year – not just in football, but across all sports. This year we’ve managed to significantly improve on what many collectors thought was pretty close to perfection.”

See a complete gallery after the jump.

Panini acquired the rights to Pacific in 2004, but have tweaked Crown Royale. Some of the tinkering includes new inserts such as Calling All Captains, Crown Jewels, Kings of the NFL and Net Fusion, which include autographed memorabilia cards numbered to 50 or less.

According to Panini, there are also larger memorabilia pieces in inserts than last year’s set.

“We understand that a hit-per-pack product like Crown Royale must deliver value at both the pack and box levels, and the on-card autograph and prime-memorabilia content we’ve crammed into this product will be a huge part of this product delivering in a big, big way this season,” Ecklar added. 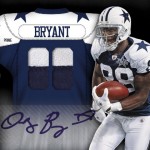