The Vladimir Guerrero Jr. era has begun in Toronto. And even before his first official at bat in a major league game, many of his top early cards and autographs are expensive. At the time of his call-up, BGS 9.5 copies of his 2016 Bowman Chrome autographs were selling for NM 1968 Nolan Ryan Rookie Cards. Even raw copies are going for hundreds.

Even the regular 2016 Bowman Chrome Prospects Vladimir Guerrero Jr. card is going for more than $50. And this is the base version, not a Refractor.

But that doesn’t mean all Vladimir Guerrero Jr. cards are expensive. Here are five nice and notable cards that won’t break the bank.

The 2016 Bowman Chrome Vladimir Guerrero cards get much of the glory but 2015 Elite Extra Edition is the first major set to include the slugger. In its most basic form, this isn’t a rare card. And even though its his baseball card debut, it can be found for a few bucks. It does have an autographed version that is, understandably, much more expensive. 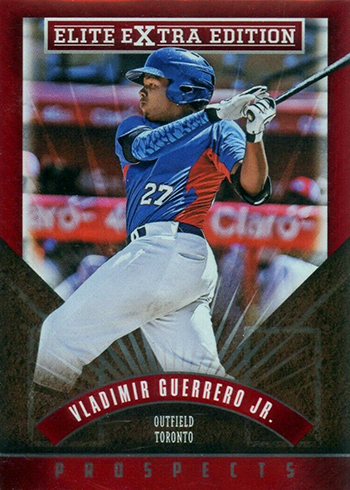 The Bowman Chrome autograph has reached elite levels. And when it got really high, collectors started looking for an alternative. That led them to the base Chrome version. But the regular “paper” 2016 Bowman Prospects Vladimir Guerrero Jr. is still very affordable. It might not have the same shine, but it’s still among his first cards in an MLB uniform. It’s found in packs of 2016 Bowman Baseball. 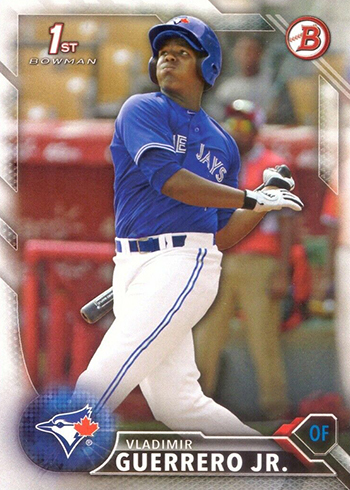 Family is something that Vladimir Guerrero Jr. brings up in a lot of his interviews. It’s an important part of who he is. Baseball fans are familiar with his lineage. His father was a Hall of Famer not that long ago, spending a big chunk of his career in Canada, like Jr. will start his. Although not a highly priced card, the 2016 Bowman Family Tree insert featuring the father-and-son pair is a nice look one of baseball’s biggest families in the last 25 years. 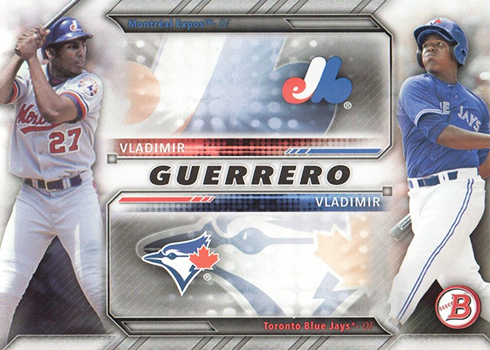 Another reasonably priced Bowman Chrome alternative, the 2016 Bowman Platinum Top Prospects Vladimir Guerrero Jr. comes from a set that was originally available only at Walmart. While it doesn’t have a full chromium finish, it does come on foil so there is some pop. It’s like an in-between version of Bowman and Bowman Chrome. 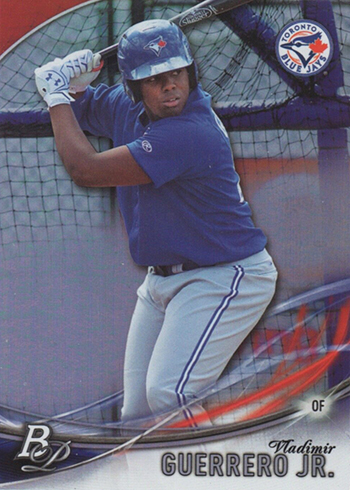 “Expensive” is a relative term. The 2017 Topps Heritage Minors Vladimir Guerrero Jr. is easily the most expensive card on this list. Still, compared to a lot of his major cards, this one is cheap. Heritage base cards, both MLB and MiLB, maintain a strong level of popularity. This is also one of 20 short prints, which combine to land 1:6 packs. So it’s in noticeably less supply but not scarce. 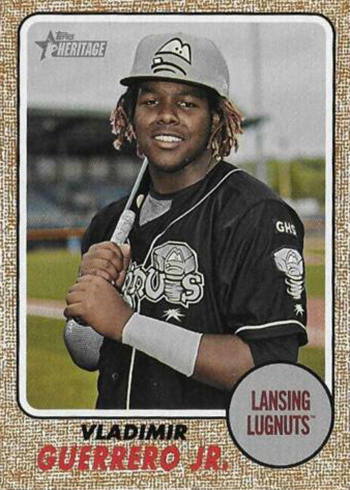