Baseball was supposed to be emerging from the All-Star Break around now. Instead, things are just getting started — again. Pandemics have a way of doing that. The world is in a very different place than it was just a few months ago when spring training was heading into its final days. After some long months, baseball is on its way back. And even if everything goes exactly as planned, things are going to be different. And it has taken only one preview image from a limited online-only baseball card set to help drive home that reality.

Mike Trout running the infield while wearing a mask. 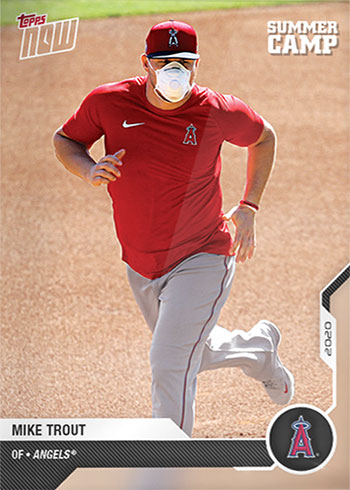 There’s no doubt when the photo is from. This is the reality we’re in right now. And if all goes well in the months ahead, it’ll be a one-off deal — a moment in time that’s easily identifiable.

If masks become a requirement as the season gets underway or players simply opt to wear them, there’s a good chance we’ll see more cards like this over time. That’s one of the roles of baseball cards. They’re documents of time often combining photos and stats.

As we look back on 2020, this is a document of that. So while it might be a little striking of a visual because we’re not used to it at the moment, it’s important to document the changes we’re seeing. Things might change as the season rolls out, but this is where we’re at. This can be the “Mike Trout Mask” card.

Summer Camp Edition isn’t going the team set route. Rather, it’s three weekly sets, each with 25 cards. Each set is $29.99.

Parallels are randomly inserted. These have three levels numbered to 10, 5 and 1/1.