2020 Rittenhouse Twilight Zone Archives isn’t the first set for the classic show to use inscribed autographs. However, it’s certainly upping the content in that regard over 2019’s Twilight Zone: Rod Serling Edition. For this set, autographs land two per box. At least one of those has an inscription. 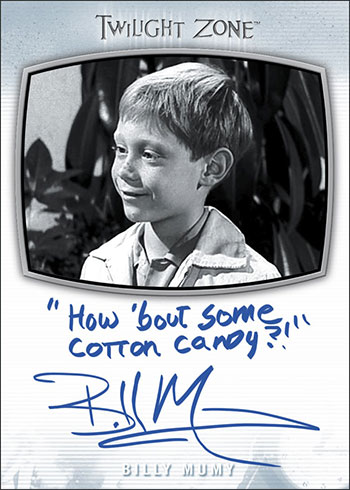 The base set is actually an expansion of an insert series that began in the Rod Serling Edition set. The 64 cards take on a Portfolio Prints theme, covering the episodes the earlier inserts didn’t. Each uses artwork from Juan Ortiz.

Inscription Autographs are one of the biggest draws in the entire product. While one is guaranteed in every box, some will have two. Inscriptions not only have a signature from the featured actor like traditional autographs, but a short note as well. This might be a classic line of dialogue, character name, episode or something else. Besides the added personalization, it also opens up the possibility of lots of variations. 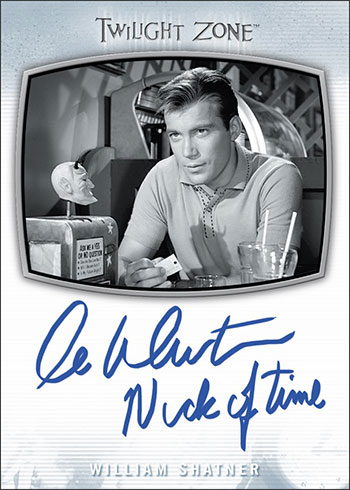 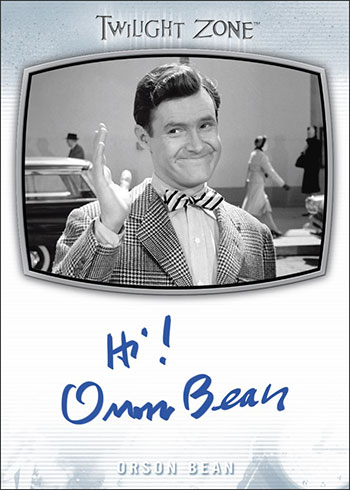 The product also has a pair of Dual Autograph Booklet cards that have a cut signature from Rod Serling. On one he’s paired with William Shatner while the other has Serling along with Bill Mumy.

2020 Rittenhouse Twilight Zone Archives has five additional chase sets. Four of these are expansions for inserts that have already started:

The inserts round out with nine Twilight Zone Acetate cards. These fall approximately every fourth box (1:96 packs).

Additionally, there’s a custom binder. It comes with an exclusive promo card that’s not available elsewhere.

2020 Twilight Zone Archives has some exclusive incentives available to those ordering multiple cases.

Bill Mumy and William Shatner have Portfolio Print Autographs. The Mumy is a six-case incentive while Shatner is the nine-case. 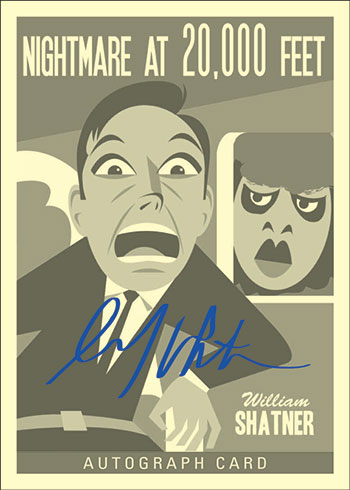 Those purchasing 18 cases receive a special Archive Box. Among the contents is a set of four printing plates used to make the same base card. There’s also a Pamela Austin autograph (#174b) that is not in regular packs. 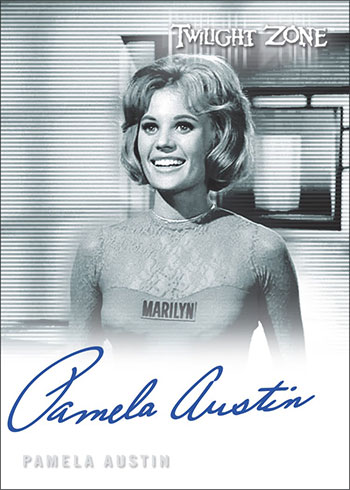 The following is a list of confirmed signers for the set. It is expected to grow and is subject to change. 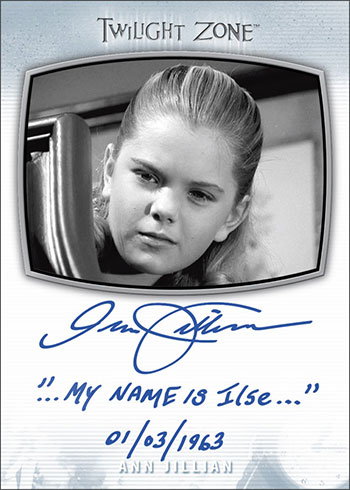 Mary Badham in The Bewitching Pool
Barbara Barrie in Miniature
Orson Bean in Mr. Bevis
Bonnie Beecher in Come Wander With Me
Sherry Jackson in The Last Rites of Jeff Myrtlebank
Ann Jillian in Mute
Bill Mumy in In Praise of Pip
Peter Mark Richman in The Fear
William Shatner in Nick of Time
George Takei in The Encounter
Joyce Van Patten in Passage on the Lady Anne
H. M. Wynant in The Howling Man 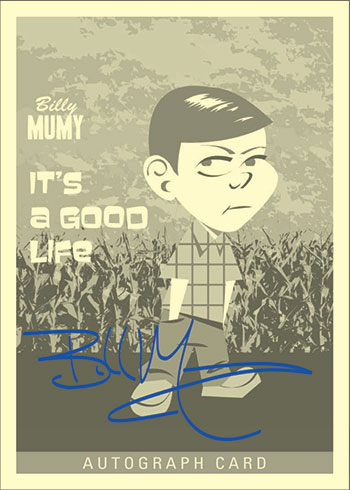 The full 2020 Rittenhouse Twilight Zone Archives checklist will be posted when it becomes available.

Looking at Some Vintage and Retro Non-Sport ...