2019 Topps Allen & Ginter Baseball is here. And, as usual, there’s an eclectic mix of cards (and flower seeds). Here are some of the things you might want to look for or pay a little extra attention to if you’re busting packs.

The Stained Glass Minis are a new addition to 2019 Allen & Ginter. The partial parallel set offers up some of the most distinct cards in the entire product. 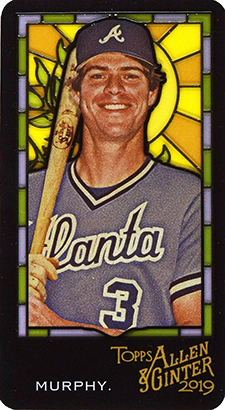 Stained glass inserts are nothing new. 1996 Studio Stained Glass Stars and 1997 Topps Gallery Gallery of Heroes are just a couple of the sets that come to mind, and they’re both more than 20-years old. There have been a few others done in a similar style since as well.

The combination of bright colors and plastic-like stock still have tremendous pop even when shrunken down to the mini card format. It’s also a refreshing addition that give new life to the minis.

At 1:6 hobby pack, History of Flight is one of the easiest inserts to pull in 2019 Allen & Ginter. The painted images chart the evolution of machines that fly from the Wright Brothers through to space travel. They’re both attractive and informative.

If you’re piecing it together one card at a time, you might not notice the little surprise that comes with the set. All 15 cards fit together to form a massive panoramic puzzle.

Just like the past several years, Rip Cards still feature exclusive mini cards that expand the base set. But they might cause some confusion this year without a checklist handy.

That’s the same territory as the Rip exclusive minis. That means #351-400 all have two different mini cards. The names for each number don’t match up, though. 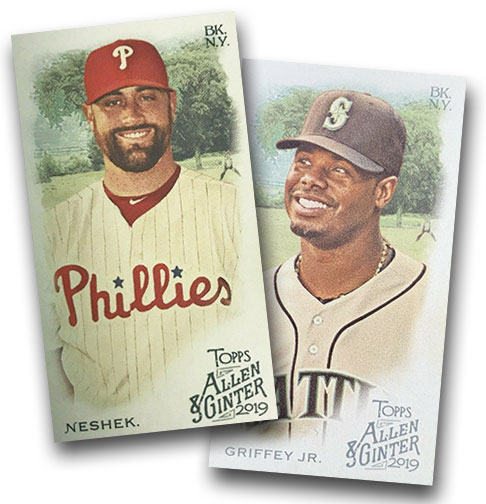 That means you might want to reference a checklist to make sure you know exactly what version you’ve come across if searching on the secondary market.

The base checklist (along with the entire 2019 Topps Allen & Ginter checklist) can be seen on our main page for the set.

One card that wasn’t on the original checklist but has surfaced is a mini card of Thomas Fish, owner of Blowout Cards. 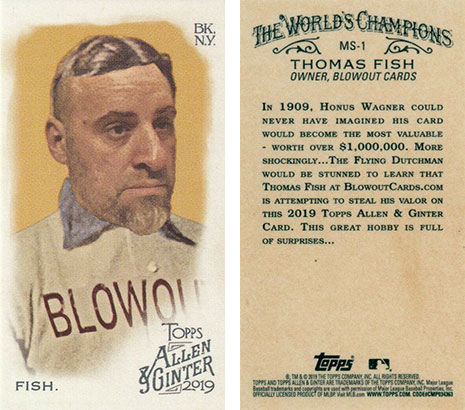 Odds and the print run aren’t known, although more than a dozen have shown up online in the first couple of days of release.

Fish also has a small number of autographs in the product.

The Biggest Surprise Might Be the Lack of Surprises

Allen & Ginter is a line that has given us a lot of surprises over the years. Remember the cards hiding in box lids a few years ago? The Glow-in-the-Dark Minis in 2018? Jack’s “Magic Beans”?

The Thomas Fish card wasn’t on the checklist. The Topps Employee Autographs weren’t either, but they’re included in the pack odds and are expected at this point as they’ve been around for many years.

It’s still very early, but there doesn’t appear to be any massive revelations so far this year. That could change. Surprises are usually on the down-low and might require a bit of a closer inspection.

Normally, though, so much is ripped so quickly that at least a hint of something being different is out there. Not so, thus far. Of course, that doesn’t mean there isn’t a surprise or two lurking in packs. Sometimes, Ginter gets tricky and manages to throw us off for a while. So it might still be a little early to stop looking and giving up the hunt. But maybe not.