2019-20 Upper Deck Premier Hockey cards take things to the upper level of the company’s high-end portfolio. It might not be quite like The Cup, but it’s close.

The configuration reflects that with six-card boxes delivering four hits: an autograph patch card (on acetate stock), a second autograph and a pair of memorabilia cards.

The main part of the release is divided into similar but separate Stars and Rookies sections. In both instances, players come in two levels, Tier 1 (/299) and Tier 2 (/199).

While there are parallels, all are in the form of autographs or memorabilia cards. On the signature side, which are on-card, there’s Silver Spectrum (Stars – 1:8 packs, Rookies – Tier 1 1:3, Tier 2 1:30), and Platinum Blue Spectrum (/3). 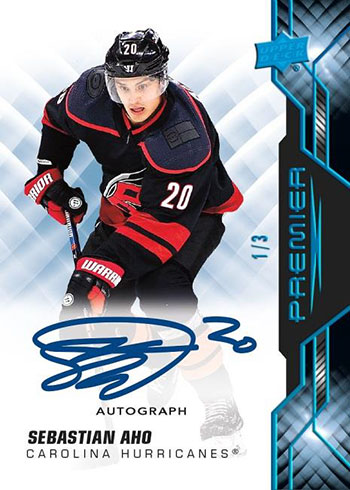 Jersey parallels (Stars – 1:5, Rookies – 1:3) kick off the memorabilia. Star have additional Premium Material cards while freshmen get Patch versions (Tier 1 /49, Tier 2 /15). Rounding things out on both sides of the checklist are Fight Strap (Stars /5, Rookies /15) and Neckline/Collar (/3). 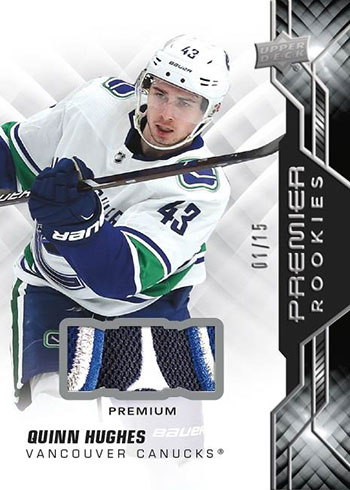 Every box of 2019-20 Upper Deck Premier Hockey includes an autograph patch card that has an added layer of distinctiveness thanks to the acetate stock it’s printed on.

Acetate Rookie Autograph Patch cards have either 249, 149 or 99 copies each, depending on the player. Additional parallel versions come in Gold Spectrum (/49 or /25) and one-of-one Platinum Blue. 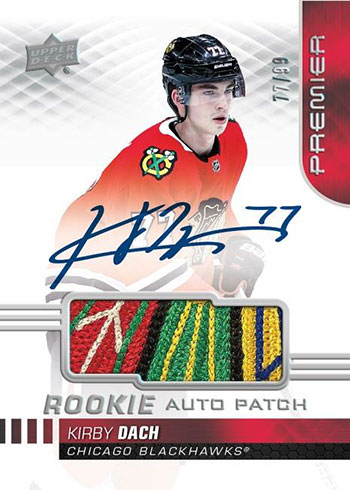 Taking a similar path are Acetate Stars Auto Patch cards. Base versions are tougher, though, with no more than 49 copies each. Gold Spectrum (/5) and Platinum Blue (1/1) parallels are also available here.

The acetate and autograph combination isn’t limited to patch cards. 2019-20 Premier has Acetate Rookies Autos (/149 or less). New this year are Horizontal Variants, which have 99 copies each. 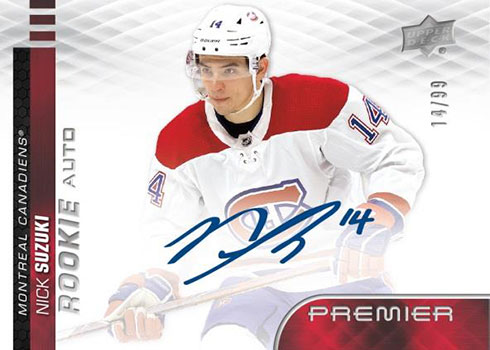 Other autograph inserts in the product include Pursuing Greatness, Signature Award Winners, and Signature Champions. 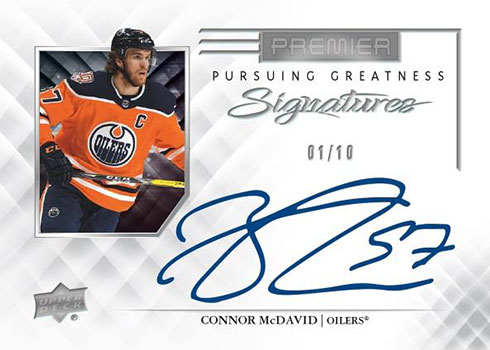 Mega Patch cards highlight the memorabilia offerings in 2019-20 Upper Deck Premier Hockey. These have large pieces of game-used gear like chest logos, sleeve numbers, commemorative logos and shoulder logos. Print runs vary from card to card, but none are higher than 25. 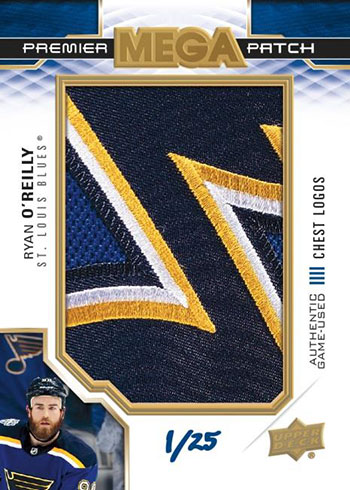 Premier Duals (/15), Trios (/10) and Quads (/10) are home to multi-memorabilia pieces. These have additional patch versions with print runs of five copies. 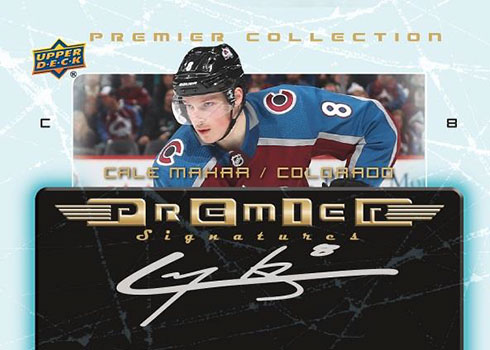 2002-03 Premier Collection is also the foundation for Retro Jersey (/49) and Dual Jersey (/49) cards. Both have patch versions that are limited to five copies.

The full 2019-20 Upper Deck Premier Hockey checklist and team set lists will be posted as soon as they’re available, likely shortly before the set comes out.