60 years ago, on January 18, 1958, Willie O’Ree made history by being the first black player to play in an NHL game. The night before the anniversary, the Boston Bruins honored O’Ree and his legacy in a pre-game ceremony.

Upper Deck was in on the celebration as well. They created a special Heroic Inspirations Willie O’Ree card that was given to those at the game. 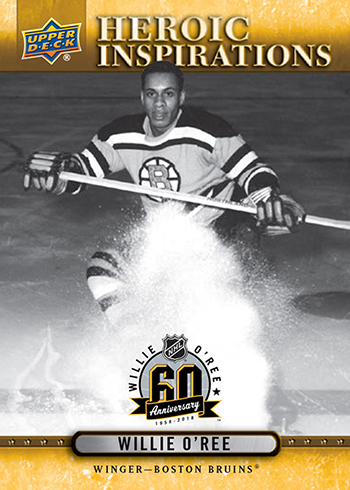 Upper Deck noted on their blog, that the card will also be available at select dealers in the Boston area for those not able to make it to the game.

O’Ree has several cards but not a lot. Most have been released in the last 20 years or so. Although his pro career lasted 21 seasons, he appeared in just 45 total NHL games. So the closest thing he had from his playing days was a Beehive photo and a couple of minor league issues.

Pinnacle included O’Ree in 1997-98 Beehive Hockey, an over-sized revival-style product. Included on the checklist was an autographed card.

In the years since, O’Ree has appeared in products from several manufacturers.