2018 Rittenhouse Star Trek TOS Captain’s Collection trading cards combine several different elements. Among them? Inscription autographs that come with both a signature and an added note or line of memorable dialogue.

The checklist goes deep into The Original Series with lots of photos, a broad mix of inserts and even a preview of the company’s first set of Discovery trading cards.

Each box has a pair of autographs.

The main part of Star Trek TOS Captain’s Collection is the base set. It has 80 cards that cover every episode of the show’s run. Each card has multiple photos but what sets it apart from the many other sets of Star Trek trading cards are the new captain’s logs that accompany them. These are told from the perspectives of Captain Kirk and Captain Pike.

The base set comes with Throwback parallels. These land just one per box, which should make putting a full run together a challenge.

The Inscription Autographs are a first for the franchise. The notations vary from signer to signer, opening up a lot of room for variations. Inscription signers include Joan Collins, Sean Kenney, BarBara Lun, Clint Howard, Michael Forest and Gary Lockwood. 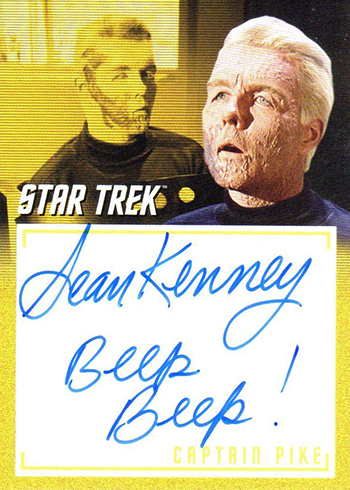 The set also goes back to the enduring Classic TOS Autographs. These date back to when SkyBox had the Star Trek card line. Signers here not only include key stars, but fill in some of the numerical gaps. Among them are William Shatner (#A270), Leonard Nimoy (#A280), Walter Koenig (#A281), Nichelle Nichols (#A282) and George Takei (#A283).

Cut signatures are also randomly inserted in packs. The first is an Cut Signature Relic from Susan Oliver. She played Vina in The Cage, the show’s original pilot. The relic swatch comes from the material she wore in her first scene. Vic Tayback, Jojo Krako in A Piece of the Action, is the product’s other cut signature.

Where No Man Has Gone Before Uncut is kind of like a set within the main set. Clocking in at 70 cards, it focuses entirely on the pilot that originally aired and introduced us to Captain Kirk. These fall approximately two per box.

Star Trek TOS Lobby Cards is another large insert set, this time with 80 cards. Each of these have new art from Juan Ortiz. He’s the artist who did the recent Star Trek Portfolio Prints sets. Lobby Cards are 1:12 packs.

Not all of the inserts in 2018 Rittenhouse Star Trek TOS Captain’s Collection come with massive checklists. Inside the Enterprise (1:48 packs) has nine cards. As the name suggests, it looks at some of the most iconic locations on the ship. Star Trek Movies Captain’s Log Cards (1:288 packs) expands on the base set theme to incorporate the first seven Star Trek films. Star Trek: Discovery has four preview cards for the card maker’s Season 1 set. These land at a rate of about one per case.

Canada Post 50th Anniversary Stamp Cards fold in another type of collecting. Each of these cards, which are inserted 1:288 packs, has an original lenticular stamp embedded in it.

Sketch cards return with original art. These work out to approximately one per case. 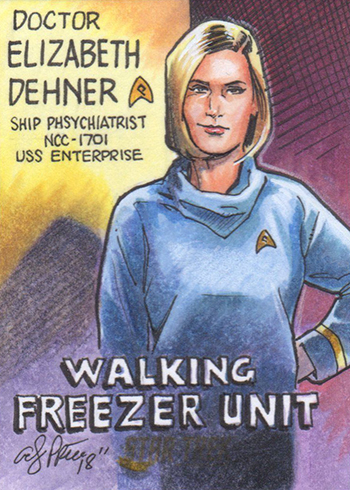 Those pre-ordering six, nine and 18 cases of the product get some exclusives not available in regular packs. The six-case incentive is a Dual Autograph featuring Walter Koenig and Celeste Yarnall. A second Dual Autograph card is the nine-case incentive. This one has William Shatner and Louise Sorel.

The 18-case incentive is a special Archive Box. Contents include a set of four matching Printing Plates used for one of the base cards. There’s also a memorabilia card with material from the skirt Susan Oliver wore in The Cage. This is similar to the Cut Signature Relic minus the autograph. 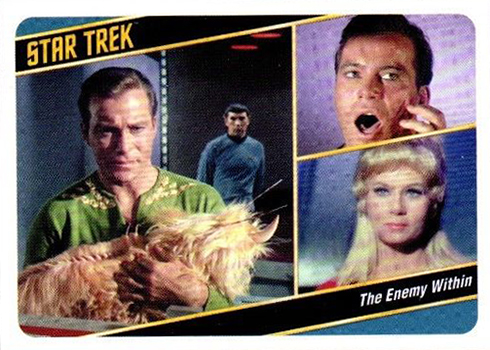 1 The Cage
2 Where No Man Has Gone Before
3 The Corbomite Maneuver
4 Mudd’s Women
5 The Enemy Within
6 The Man Trap
7 The Naked Time
8 Charlie X
9 Balance of Terror
10 What Are Little Girls Made Of?
11 Dagger of the Mind
12 Miri
13 The Conscience of the King
14 The Galileo Seven
15 Court Martial
16 The Menagerie, Part 1
17 The Menagerie, Part 2
18 Shore Leave
19 The Squire of Gothos
20 Arena
21 The Alternative Factor
22 Tomorrow is Yesterday
23 The Return of the Archons
24 A Taste of Armageddon
25 Space Seed
26 This Side of Paradise
27 The Devil in the Dark
28 Errand of Mercy
29 The City on the Edge of Forever
30 Operation — Annihilate!
31 Catspaw
32 Metamorphosis
33 Friday’s Child
34 Who Mourns for Adonais?
35 Amok Time
36 The Doomsday Machine
37 Wolf in The Fold
38 The Changeling
39 The Apple
40 Mirror, Mirror
41 The Deadly Years
42 I, Mudd
43 The Trouble With Tribbles
44 Bread and Circuses
45 Journey to Babel
46 A Private Little War
47 The Gamesters of Triskelion
48 Obsession
49 The Immunity Syndrome
50 A Piece of the Action
51 By Any Other Name
52 Return to Tomorrow
53 Patterns of Force
54 The Ultimate Computer
55 The Omega Glory
56 Assignment: Earth
57 Spectre of the Gun
58 Elaan of Troyius
59 The Paradise Syndrome
60 The Enterprise Incident
61 And the Children Shall Lead
62 Spock’s Brain
63 Is There in Truth No Beauty?
64 The Empath
65 The Tholian Web
66 For the World is Hollow And I Have Touched The Sky
67 Day of the Dove
68 Plato’s Stepchildren
69 Wink of an Eye
70 That Which Survives
71 Let That Be Your Last Battlefield
72 Whom Gods Destroy
73 The Mark of Gideon
74 The Lights of Zetar
75 The Cloud Minders
76 The Way to Eden
77 Requiem for Methuselah
78 The Savage Curtain
79 All Our Yesterdays
80 Turnabout Intruder 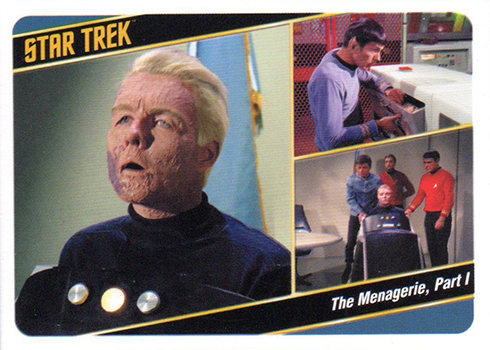 All autographs combine to land 1:12 packs. 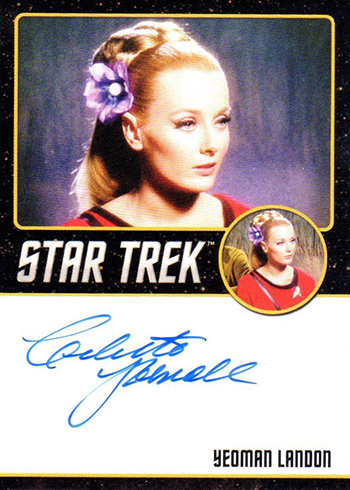 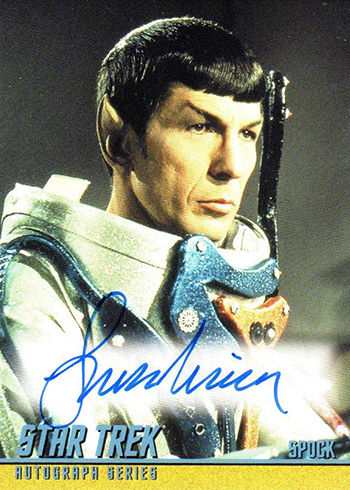 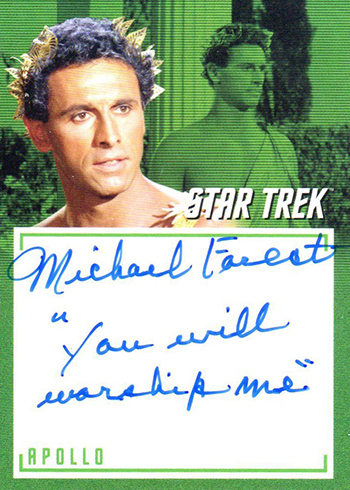 A02 BarBara Luna as Marlena in “Mirror, Mirror” – Limited
A03 Clint Howard as Balok in “The Corbomite Maneuver” – Limited
A04 Robert Walker Jr. as Charlie Evans in “Charlie X” – Limited
A05 Joan Collins as Edith Keeler in “The City on the Edge of Forever” – Extremely Limited
A06 Sean Kenney as Captain Pike in “The Menagerie, Parts 1 and 2” – Limited
A07 Michael Forest as Apollo in “Who Mourns For Adonais?” – Very Limited
A08 Louise Sorel as Rayna Kapec in “Requiem For Methuselah” – Extremely Limited
A10 Antoinette Bower as Sylvia in “Catspaw”
A11 William O’Connell as Thelev in “Journey to Babel” – Very Limited
A12 Mariette Hartley as Zarabeth in “All Our Yesterdays” – Limited
A14 Sally Kellerman as Dr. Elizabeth Dehner in “Where No Man Has Gone Before” – Limited
A15 Joanne Linville as Romulan Commander in “The Enterprise Incident” – Limited
A16 Gary Lockwood as Lt. Gary Mitchell in “Where No Man Has Gone Before” – Limited 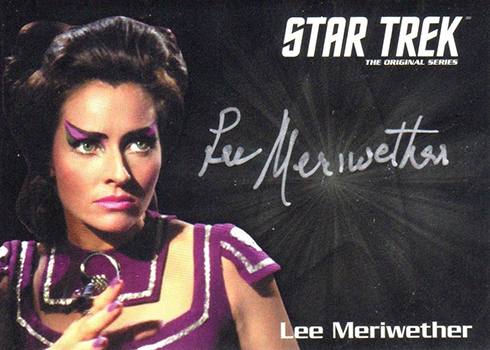 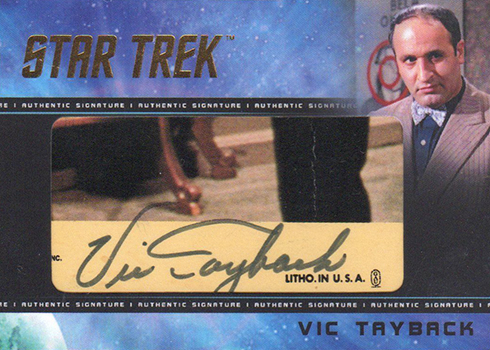 Vic Tayback as Jojo Krako in “A Piece of the Action”

Susan Oliver as Vina in “The Cage” 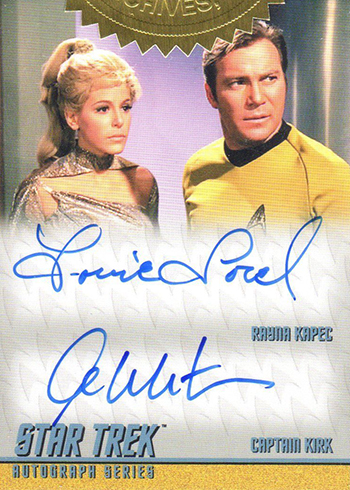 Susan Oliver as Vina in “The Cage” 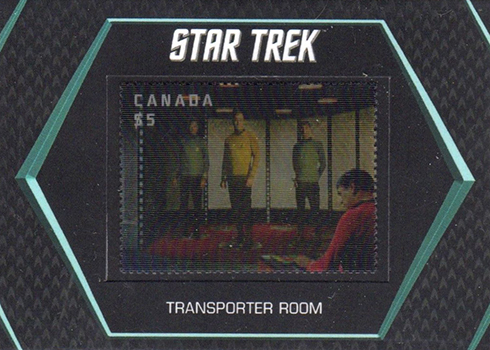 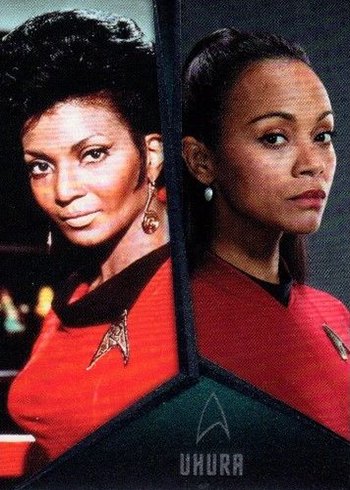 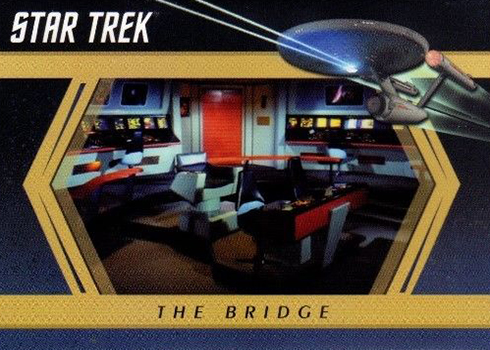 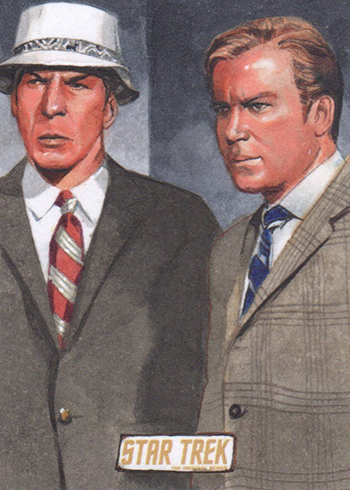 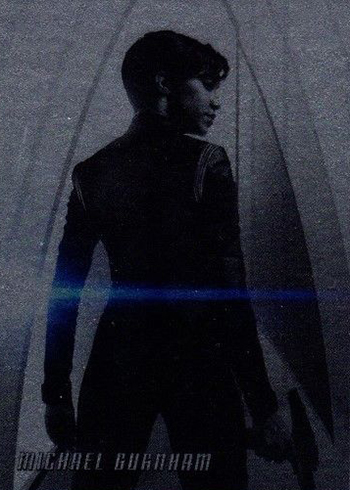 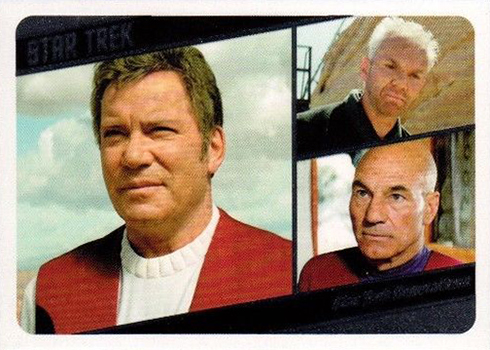 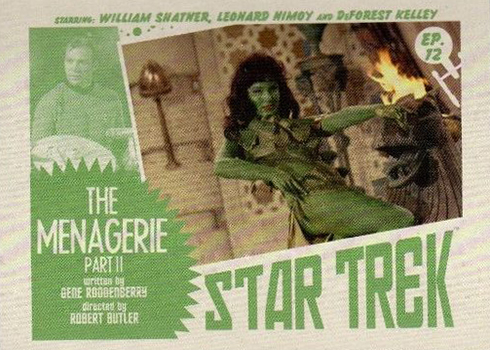 1 The Man Trap
2 Charlie X
3 Where No Man Has Gone Before
4 The Naked Time
5 The Enemy Within
6 Mudd’s Women
7 What Are Little Girls Made Of?
8 Miri
9 Dagger of the Mind
10 The Corbomite Maneuver
11 The Menagerie, Part 1
12 The Menagerie, Part 2
13 The Conscience of the King
14 Balance of Terror
15 Shore Leave
16 The Galileo Seven
17 The Squire of Gothos
18 Arena
19 Tomorrow is Yesterday
20 Court Martial
21 The Return of the Archons
22 Space Seed
23 A Taste of Armageddon
24 This Side of Paradise
25 The Devil in the Dark
26 Errand of Mercy
27 The Alternative Factor
28 The City on the Edge of Forever
29 Operation — Annihilate!
30 Amok Time
31 Who Mourns for Adonais?
32 The Changeling
33 Mirror, Mirror
34 The Apple
35 The Doomsday Machine
36 Catspaw
37 I, Mudd
38 Metamorphosis
39 Journey to Babel
40 Friday’s Child
41 The Deadly Years
42 Obsession
43 Wolf in The Fold
44 The Trouble With Tribbles
45 The Gamesters of Triskelion
46 A Piece of the Action
47 The Immunity Syndrome
48 A Private Little War
49 Return to Tomorrow
50 Patterns of Force
51 By Any Other Name
52 The Omega Glory
53 The Ultimate Computer
54 Bread and Circuses
55 Assignment: Earth
56 Spock’s Brain
57 The Enterprise Incident
58 The Paradise Syndrome
59 And the Children Shall Lead
60 Is There in Truth No Beauty?
61 Spectre of the Gun
62 Day of the Dove
63 For the World is Hollow And I Have Touched The Sky
64 The Tholian Web
65 Plato’s Stepchildren
66 Wink of an Eye
67 The Empath
68 Elaan of Troyius
69 Whom Gods Destroy
70 Let That Be Your Last Battlefield
71 The Mark of Gideon
72 That Which Survives
73 The Lights of Zetar
74 Requiem for Methuselah
75 The Way to Eden
76 The Cloud Minders
77 The Savage Curtain
78 All Our Yesterdays
79 Turnabout Intruder
80 The Cage

Where No Man Has Gone Before Uncut 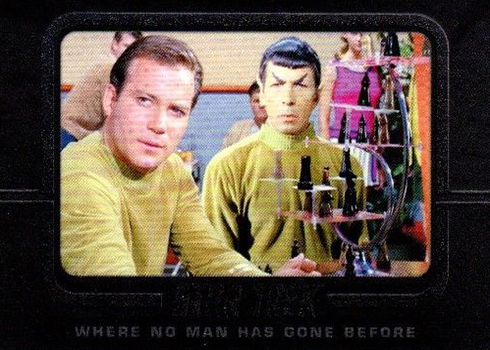 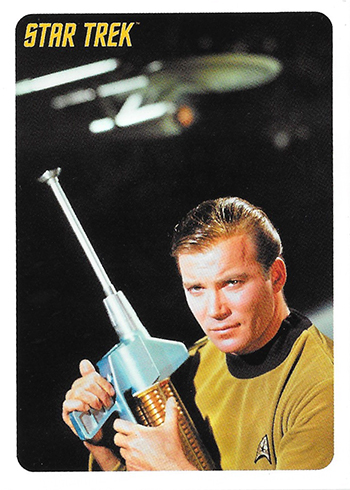