2018 Bowman Big League Breakthrough cards look rather unassuming at first glance. But there’s much more at play with these inserts. First, they’re only in retail packs. Second, and more importantly, they’re a predictor type of card. 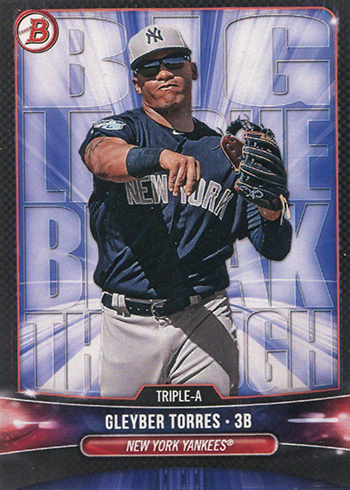 If the player on the front gets called up to the majors in 2018, you can get another exclusive card. An upgrade, if you will.

The first step to the 2018 Bowman Big League Breakthrough is getting the cards. Unless you’re going the secondary market route, that means finding them in packs.

The inserts, which double as contest cards, aren’t in traditional hobby packs. Rather, they’re exclusive to 2018 Bowman Baseball retail packs and blaster boxes found in stores like Walmart and Target.

Even then, they’re not easy pulls. Odds of finding one of the 40 different 2018 Bowman Big League Breakthrough cards are 1:164 regular retail packs and 1:75 retail fat packs. 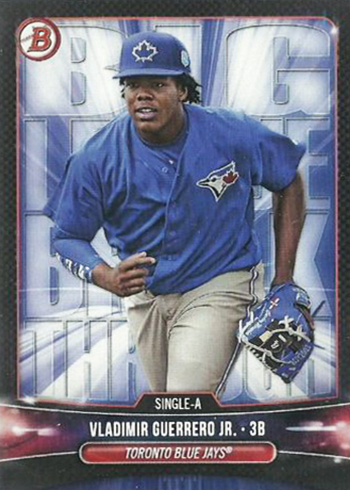 Based on the rules document, each player has 250 total prize card should they make their debut. Some of those could be reserved for No Purchase Necessary entries (outlined below), but it is further proof that even the entry cards are moderately rare. As codes are scratched, entry cards in their original condition will become that much more scarce.

Once you have a card with the code, you enter it online at the Topps website. You’ll need to be registered with a Topps online account.

You can also mail an entry in and enter that way. Simply fill out the contact info on the back. According to Topps, you should also write this info on an index card along with the code.

Mail-in entries card be sent to:

All 2018 Bowman Big League Breakthrough codes that are entered, whether the player makes it to the majors or not, is entered into a separate prize drawn.

Ten people win the first prize, a set of 2018 Bowman Chrome Prospect Autographs, which has 43 cards.

The 2018 Bowman Big League Breakthrough has a No Purchase Necessary component as well that gives you a potential entry for the price of a stamp.

Send that info to:

According to the official rules document, entries will be drawn at random at the same odds in packs. Those picked get a code and a player name from the checklist (not an original card).

There’s a limit of one NPN entry per household and requests must be received by October 15, 2018.

Topps has a ten-page rules document posted on their site that has all the fine print and legal jargon in case you have further questions.

Here’s a list of players in the set who have made their MLB debuts already and qualify for the exclusive prize cards. 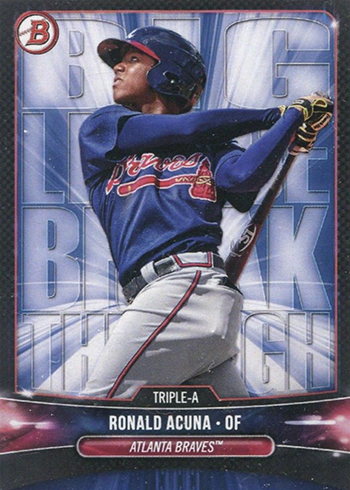