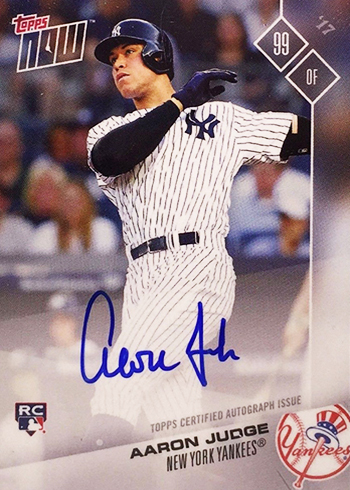 Topps Now Platinum Members got this surprise in the mail today. @tradercracks pic.twitter.com/aAWGodypHZ

Topps Now Platinum members were selected based on purchases made through the online-exclusive line last year. There was no application and members were first notified they were selected before the start of the baseball season. It was a surprise for all selected with an initial membership that included autographs from the likes of Kris Bryant, Mike Trout, Clayton Kershaw and six others.

A couple months into the season, a Paul DeJong autograph followed.

Judge has had three different 2017 Topps Now autographs (not including parallels) prior to this. The Platinum autograph is not connected to a specific event.

This latest autograph was delivered by mail. Like the others, it wasn’t announced in advance or even publicized by Topps.

An official number of 2017 Topps Now Platinum memberships hasn’t been announced. However, it shouldn’t be any more than 25 based on the fact that the first batch of autographs came serial numbered.

A couple of the 2017 Topps Now Platinum Aaron Judge autographs have already found their way to eBay but with massive price tags attached to them.