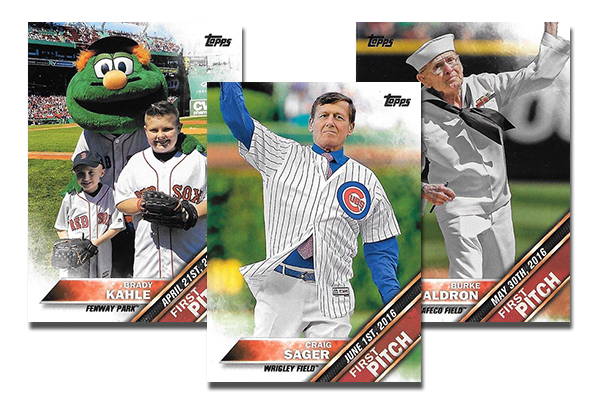 The 2016 Topps Update Series First Pitch checklist isn’t a big one. Compared to some of it predecessors, it doesn’t have the same level of celebrity glitz either. But when you look a little closer at who is in the insert set, a theme emerges. Heroes.

No, Jake Gyllenhaal saving the world in The Day After Tomorrow doesn’t count.

Rather, it’s inspirational people from everyday life that standout here. That might not make for big prices on the secondary market. But this is an insert set that hasn’t really been about values. A couple of early ones took off, finding a place among music fans who don’t normally collect cards.

First Pitch cards are easy pulls in a product not known for its limited print runs. Enjoying them isn’t about what they’re worth.

The 2016 Topps Update Series First Pitch cards continue from Series 1 and Series 2. Some of the earlier ones were included in 2016 Topps Chrome as well.

For the first time, relics are also in the mix. Seven of the ten cards have limited versions that have a ticket stub from the featured game embedded in them. Each is numbered to 25. 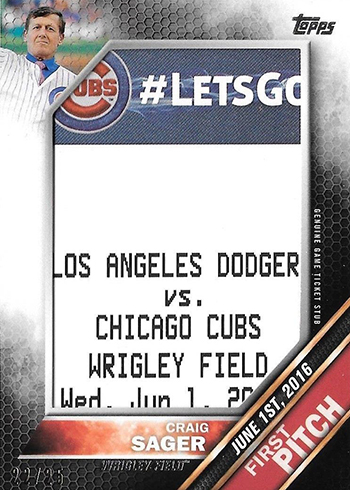 Here’s a look at the ten First Pitch inserts in 2016 Topps Update Series Baseball and who they are, heroes and celebrities alike.

Jeff Bauman is a survivor of the Boston Marathon bombing. He suffered multiple injuries including having both of his legs amputated. Bauman was a key part of the FBI’s investigation having made eye contact with one of the bombers. He threw out the first pitch at Fenway three years and three days after the tragedy. 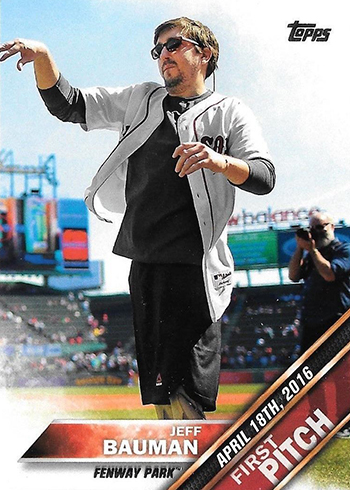 Jake Gyllenhaal is one of the most respected actors in Hollywood today. He adds some celebrity content to the First Pitch checklist but his card is connected directly to Baunmann’s. Gyllenhaal is playing Bauman in the upcoming Stronger. The two participated in the ceremony together. 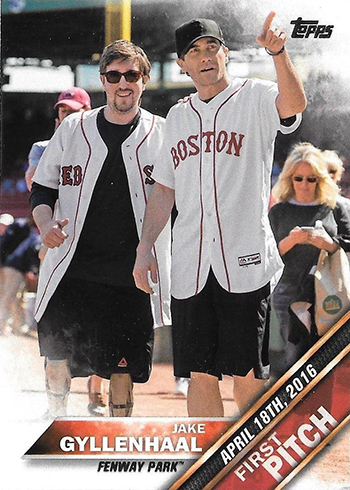 Warren G is one of a few musicians on the checklist. However, it was the rapper’s rendition of “Take Me Out to the Ballgame” that was more notable than the pitch itself — and not in a good way. 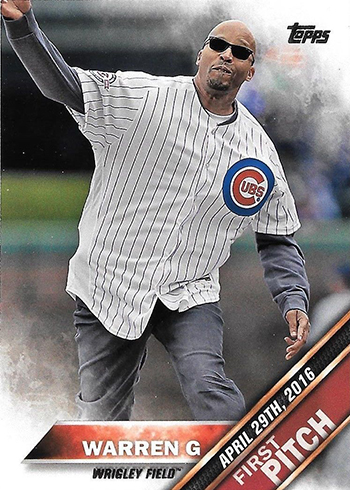 If you’re a card collector, hopefully you’ve heard of Brady Kahle by now. Upon learning that his friend Landen had cancer, Brady started to sell his baseball cards to help support Landen’s family. His selfless act snowballed and, to date, Brady and his Cards for a Cause program has raised $13,000 and counting.

Appearing on the baseball card, Brady is understandably thrilled. “It’s mind blowing. I don’t really have words. I’m pretty sure it’s the coolest thing ever. One day I’m going to have another one, but I’ll be older and playing for the Red Sox!”

Upper Deck also produced a special Heroic Inspirations card for Brady, which was presented to him at the 2016 National Sports Collectors Convention in Atlantic City.

Brady felt it was important that Landen appear on the First Pitch card with him. The friends are joined by Wally the Green Monster. 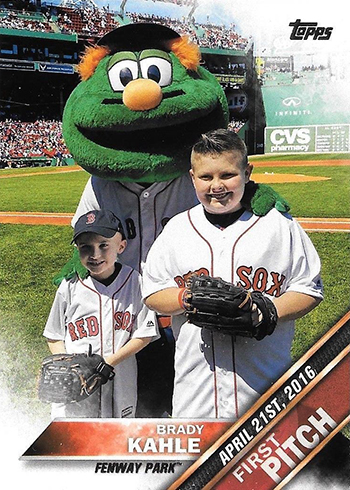 Keith Urban is one of the top country music acts of the last 20 years. Besides a long list of hit albums and awards, Urban was also a judge on American Idol at the end of its run. 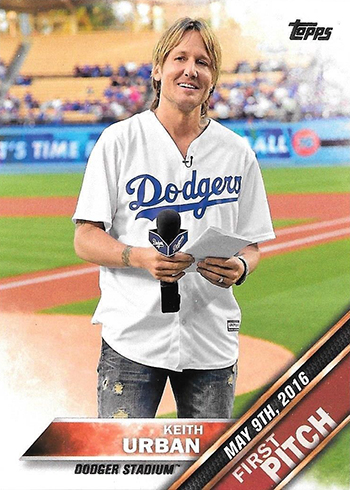 Rising to fame on TV’s Parks and Recreation, the actress is probably the biggest name in the set as far as star power goes. Her recent credits include Bad Grandpa and Mike and Dave Need Wedding Dates.

This isn’t the first time Plaza has appeared on trading cards. She’s in the 2013 Parks and Recreation set from Press Pass including autographs and costume cards. 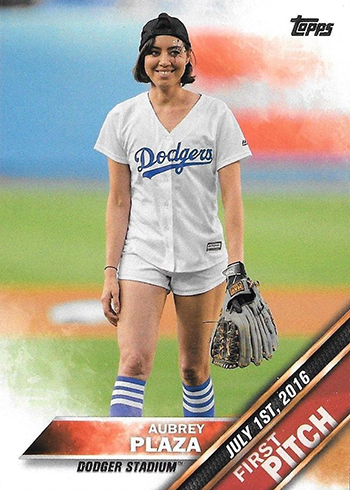 Chance the Rapper lets it be known what he does with his name. Popular on both the commercial and critical levels, he was the special guest on a rainy early-season game in Chicago. He grew up on the city’s South Side. Just over a month later, his latest album, Coloring Book, was released via Apple Music. 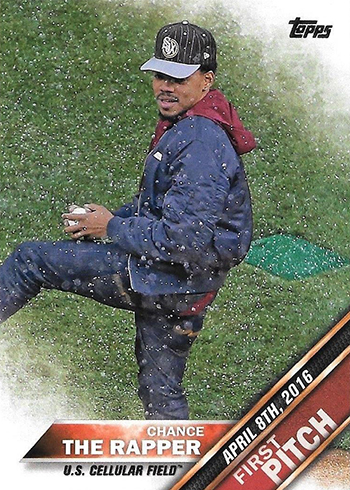 At 92 years of age, Burke Waldron ran to the mound at Safeco this past Memorial Day. He served in the Navy during World War II.

During the game, Waldron discussed his time in the Navy and his experience with the pitch. He’s joined by another WWII veteran, Bill Bassett, who talks about the significance of Memorial Day. 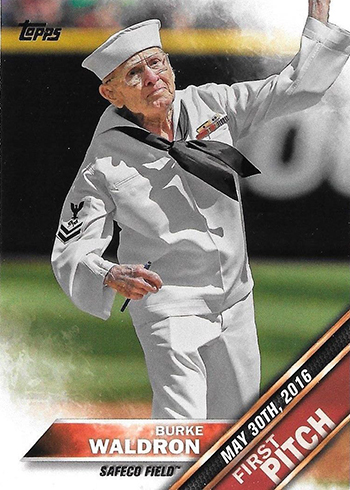 Craig Sager walks the lines of both celebrity and inspiration. The sports reporter has long been one of the most beloved in the industry. Sager’s experience is vast, covering many sports including basketball. Sager has continued to work despite battling leukemia, showing immense strength and perseverance. And check out that fashion sense. 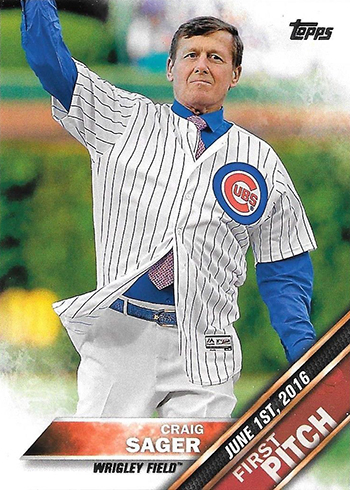 JoJo Fletcher is known primarily for appearing on The Bachelor for its twentieth season in 2016. She then went on to be the featured star of The Bachelorette immediately afterwards where she met and eventually became engaged to Jordan Rodgers. Jordan is the brother of Packers quarterback, Aaron Rodgers. 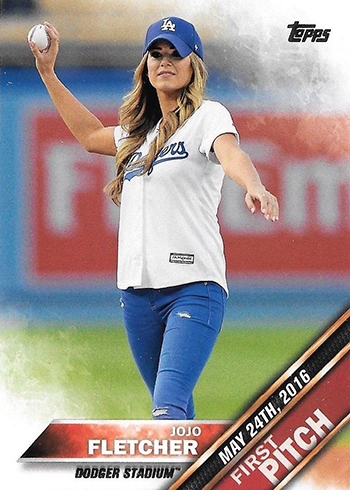