Factory sets used to be fairly common in the trading card world. Now, they are limited to select sports releases or as premium sets driven by chase elements. The 2016 Topps Star Wars: The Force Awakens factory set takes a simple approach. They actually combine the base sets from three recent releases for the seventh film in the Star Wars franchise: 2015’s Journey to the Force Awakens, TFA Series 1, and 2016’s TFA Series 2. 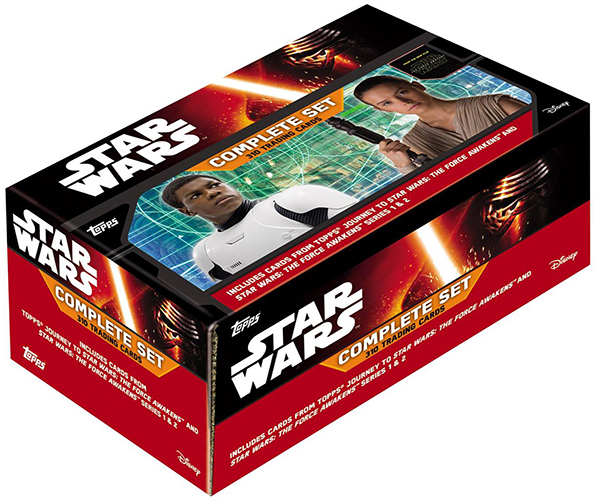 All told, the 2016 Topps Star Wars: The Force Awakens factory sets come with 310 cards. The pair of Series 2 short prints are not included.

Each of the factory set cards come with a special “Topps Complete Set” foil stamp differentiating them from the regular releases.

Sets were sold on the Topps website starting September 13.

This marks the first time that a factory set has been done by Topps for a main Star Wars film release. Return of the Jedi and Revenge of the Sith have had online-exclusive 3-D widevision sets under the premium model. These were supplements to the original releases when the films first came out. The first two Star Wars Galaxy sets from the early 1990s also had factory sets.