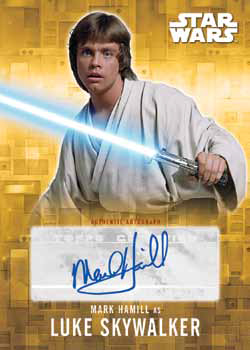 No matter what era of the franchise that you connect with, the 2016 Topps Star Wars Evolution Autographs checklist has you covered. With 86 different cards, it’s the biggest to date for a set of Star Wars trading cards. From the original films to the prequels to the animated shows and even a taste of The Force Awakens, it’s there.

Top names include Harrison Ford, Carrie Fisher, Mark Hamill and John Boyega. Hamill actually has a couple of different autographs. Of course, there’s Luke Skywalker. He also has one as Darth Bane, a character he voice in The Clone Wars.

Andy Serkis, perhaps best known for his portrayal as Gollum in The Lord of the Rings, makes his Star Wars autograph card debut.

But with such a deep checklist, there are several secondary characters and all places in between.

While the vast majority of the 2016 Topps Star Wars Evolution Autographs use stickers, there is one notable exception — John Boyega who plays Finn in The Force Awakens.

A couple of names that were originally slated for the set didn’t make the final checklist. Notable include David Prowse and Jason Isaacs. 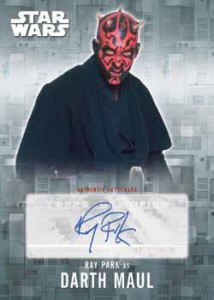 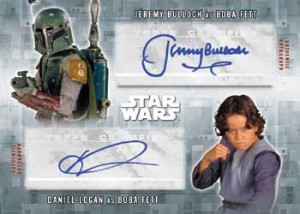 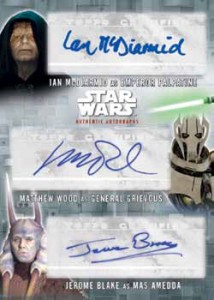 If You Want to Finish Your Set ...