Looking at who won, there will be no cancelling the 2016 Topps Chicago Cubs World Series Champions box set. A cheaper alternative to the Topps Now 2016 World Series set, it features key players from the team plus a couple of cards that help tell the story of the 2016 postseason. 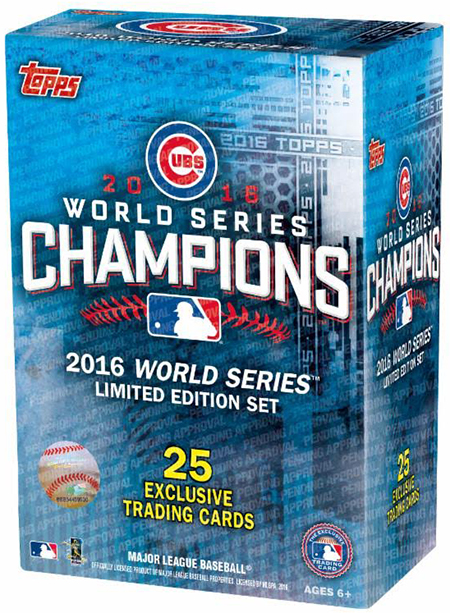 The blaster-style box set comes with 25 cards. Player cards make up the majority of the checklist, although there are also highlights from the World Series and Chicago’s playoff run to get there.

This is a traditional commemorative set that doesn’t have any additional content or marketing angles. As a result, it should be readily available for less than $25 at hobby shops and online on places like eBay. By comparison, the Topps Now sets, which come with a more limited print run and the option for an autograph, start at $50 for 15 cards.

Topps announced a similar 2015 World Series set. However, after the Kansas City Royals defeated the New York Mets, it was cancelled. Although no official reason was given, it’s likely due to the fact that the Royals don’t have the same big-market appeal as teams like the Mets, Cubs, Red Sox and Yankees.