As with past years, 2016 Leaf Sports Heroes doesn’t limit itself to one sport. It doesn’t stick to one era either. What is consistent throughout every card in the release, though, is autographs. 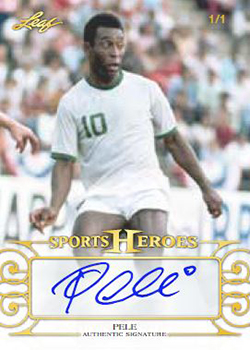 The product comes with three cards per box, all of which are signed.

In addition to base autographs, which come with parallels of varying rarities, there are several themed inserts. Famous Nicknames might not be inscribed, but they do note the player’s moniker on the card itself. New York, New York highlights stars who played in the Big Apple. Team Legends pair up multiple players from the same franchise. Or, in a special case, the Hanson Brothers from the classic hockey comedy, Slap Shot.

2016 Leaf Sports Heroes also has a massive book card with signatures from 27 members of the 1972 Miami Dolphins team that went undefeated on their way to winning Super Bowl VII.