Jack Eichel is about to begin his sophomore season with the NHL’s Buffalo Sabres and Leaf Trading Cards is about to pay tribute to its exclusive signer with the 2016-17 Leaf Jack Eichel Collection. 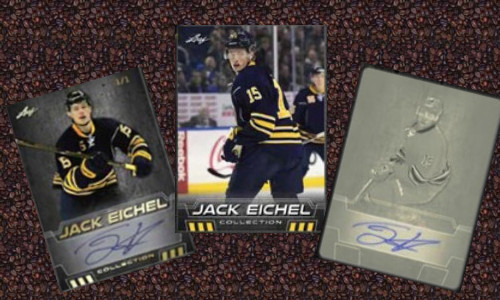 Printed to only as many copies that were ordered, each set is expected to include 30 cards which look back on his greatest moments to date. Additionally, each set will feature one hard-signed and serial-numbered autograph card which has parallel versions that are limited to as low as one-of-one.

The sell sheet for 2016-17 Leaf Jack Eichel Collection also showed off autographed printing plates and the set is expected to be released in November.

Following his lone season at Boston University where he led the NCAA in assists and points, he was taken second overall in the 2015 NHL Entry Draft by the Sabres.  Last year, he earned a spot on the league’s All-Rookie Team thanks to a 56-point performance. Recently, he skated for Team North America at the 2016 World Cup of Hockey.