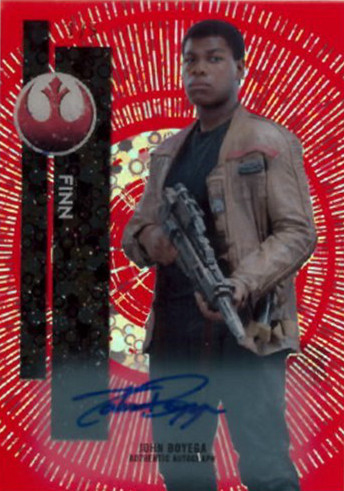 The full 2015 Topps Star Wars High Tek Autographs checklist has been unveiled. And it’s a big one.

The names cover the original saga, prequels and the recent spinoff cartoons. And a biggie from The Force Awakens.

As far as classic stars go, leading the way are the three keys to the franchise: Harrison Ford (Han Solo), Carrie Fisher (Princess Leia) and Mark Hamill (Luke Skywalker). John Boyega, who plays Finn in The Force Awakens gets his first autograph card in the set as well.

Keisha Castle-Hughes (Queen Apailana) might not be a household name, but she has had prominent roles in the past in the indie hit Whale Rider and The Nativity Story. This is her autograph card debut. Other first-time Star Wars signers non-fans may recognize are George Takei (best known for Star Trek) and Deep Roy, who played the Oompa Loompas in Charlie and the Chocolate Factory. Rounding out the list of debut signers are Michael Carter (Bib Fortuna) and Brian Blessed (Boss Nass).

In total, more than 50 signers are in the set. All 2015 Topps Star Wars High Tek Autographs are signed on-card. Cards are printed on acetate, giving them a unique look.

In addition to base versions, there are multiple levels of parallels:: Tidal Diffractor (/75), Gold Rainbow (/50), Clouds Diffractor (/25), Red Orbit (/5), and Black Galactic (1/1). Some signers, however, may not have autographs for all base and parallel versions.

This is a more high-end release than most Star Wars products with just one pack per box. Each box has either an autograph or a sketch card.

2015 Topps Star Wars High Tek releases on December 18, which just happens to be opening day for The Force Awakens.

Getting nasty with 2015 Topps Dynasty Baseball