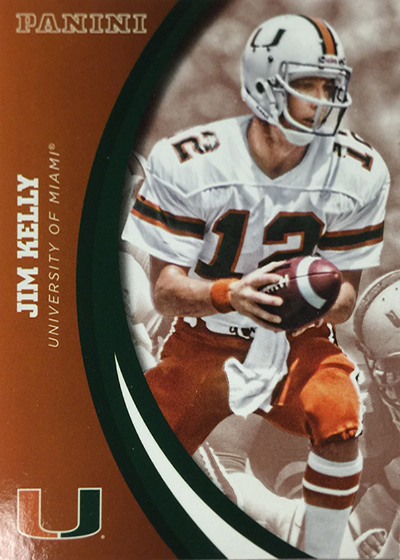 No matter where your college allegiances are, there’s no denying the powerhouse status of Hurricanes football. 2015 Panini University of Miami trading cards show that even though the sport is a big part of the school’s athletic program, there is more than just football. The product is one of 19 different school-specific sets from the card maker.

Packaged in both retail boxes and smaller blasters, each box configuration has either an autograph or memorabilia card. Retail boxes have a second as well.

The 2015 Panini University of Miami set has just 80 cards. Michael Irvin, Frank Gore, Jim Kelly and Reggie Wayne are among the school’s football greats included in the product. There is also some recent alumni like Phillip Dorsett, Ereck Flowers and Duke Johnson. Reaching beyond the gridiron are some of the school’s baseball standouts like Ryan Braun and Yasmani Grandal.

Honors inserts, which are also included in Panini’s other college sets, highlights Hurricanes players who won individual awards during their time at the school like ACC Player of the Year and Consensus All-Americans.

The Memorabilia checklist is limited to four former Hurricanes.

2015 Panini University of Miami trading cards at a glance: