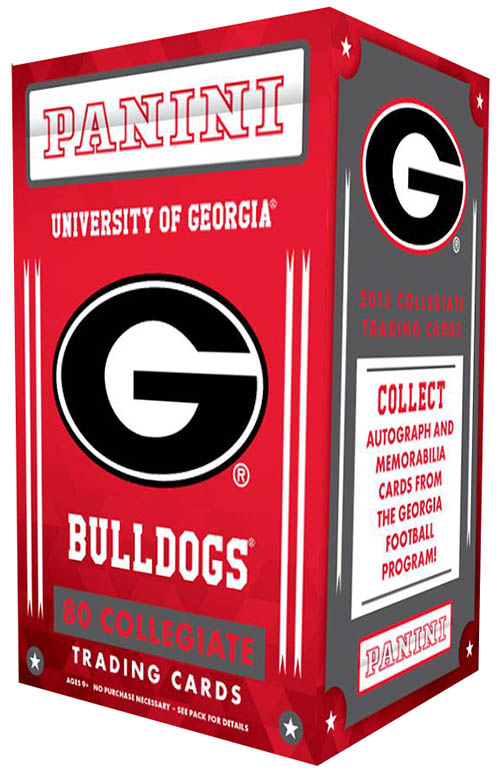 It might not be the biggest set ever, but 2015 Panini University of Georgia marks the first time the Bulldogs have starred in their own mainstream trading card product. Focusing on the history of the school’s athletic program, several notable alumni are included.

Boxes come in two forms, regular hobby boxes with 24 packs and smaller blasters. Both deliver either an autograph or memorabilia card as well as three parallels.

Like most of the card maker’s 2015 releases that hone in on an NCAA school, the 2015 Panini University of Georgia base set has just 50 cards. It’s primary focus is on football, but standouts from other sports like basketball are also included. Fran Tarkenton, Terrell Davis, Dominique Wilkins, Matthew Stafford and A.J. Green are among the established players on the checklist. Todd Gurley leads the list of recent Bulldogs.

Building off the base set are Honors inserts. These give a little added attention to players earning individual honors like SEC Player of the Year.

Signatures bring just that, with autographs from various Bulldogs alumni.

Parallels come in three levels: Silver, Gold and Black and cover all aspects of the product. For the base set, Silver cards come numbered to 99, Gold to 25 and Black have ten.

2015 Panini University of Georgia trading cards at a glance: