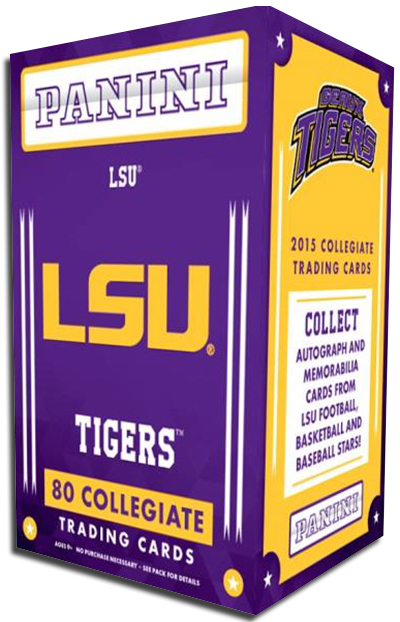 Pete Maravich, Shaquille O’Neal and dozens of other Tigers get the spotlight in 2015 Panini LSU trading cards. Another one of Panini’s largely straightforward releases dedicated to a single school.

Hobby boxes and blaster boxes both have three parallels and either a signed or memorabilia card.

Covering basketball, baseball and football, 2015 Panini LSU includes many of the school’s notable athletics alumni. In addition to Maravich and Shaq, there’s Odell Beckham Jr, Dwayne Bowe and Tyrann Mathieu. All told, the base set has 80 cards. Each has Silver (/99), Gold (/25) and Black (/10) parallels.

The appropriately named Signatures delivers some the product’s autograph content. These also have three levels of parallels numbered to 99 or less.

Honors singles out some of LSU’s top athletic achievers, with inserts of players who brought major awards like the Adolph F. Rupp Trophy for the NCAA’s top Division I basketball player and Chuck Bednarick Award to college’s best defensive player.