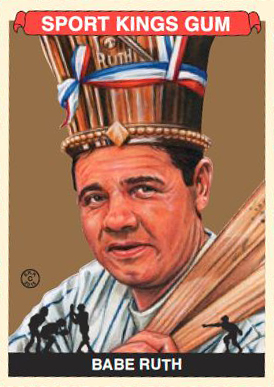 2015 Leaf Sportkings looks to all corners of sports. It doesn’t matter whether they were superstars on the baseball diamond, on the soccer pitch, in a hockey arena or a basketball court. For at least one person on the checklist, they only had to play one.

The multi-sport release returns, bringing with it one of the oldest brands in the hobby, detailed artwork and two hits per box.

The 2015 Leaf Sportkings base set legends from all walks of sports. Going back to when Sportkings debuted in the 1930s as a Goudey brand, the overall design is kept consistent. This includes realistic artwork of the featured stars and personalities.

The 100-card set includes lots of Hall of Famers including Babe Ruth. Important builders like James Naismith and Alexander Cartwright are also featured alongside athletes.

Every single-pack box has four base cards plus one Mini parallel.

On-card signatures are a major focus for the product. Sportkings Signatures have a look that’s similar to the base set. Among the advertised signers are Ken Griffey Jr, Mike Tyson, Larry Bird, Roger Federer, Cristiano Ronaldo and Mario Lemieux.

An inclusion that might be curious to some given the sports focus is Al Pacino. However, the legendary actor did play Tony D’Amato, head coach of the fictional Miami Sharks in Any Given Sunday.

Dynasty King Autographs spotlight players who played for teams that won multiple championships in a short period of time.

Memorabilia cards come from pieces of game- and match-used gear. Among them are one-of-one Spectacular Patches.