Prospecting is all about patience. It’s not about who’s hot today, but rather who is going to be big a few months or even a couple of years down the road. With that in mind, there’s a good chance that most collectors won’t know many of the names in 2015 Leaf Perfect Game National Showcase Baseball. And that’s largely the point. The all autograph product focuses on high school players, most of whom are likely years away from having a chance of breaking into the majors. 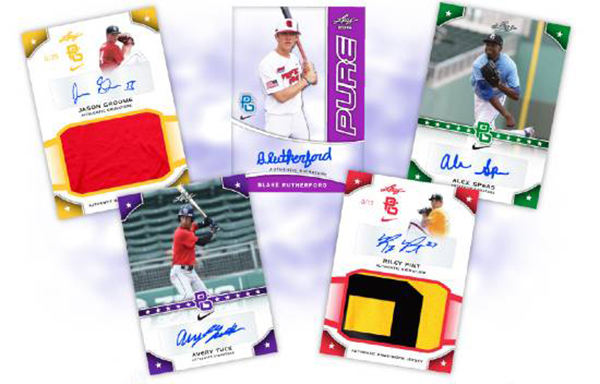 Each box has a ton of autograph content with single-pack boxes delivering a total of 25 signed cards.

The Perfect Game National Showcase brings together some of the top high school talent from across the United States and allows them to show their stuff in front of high-profile scouts. That means that the majority of the players won’t even be in the MLB Draft for a several years. The draw is that these cards represent some of the first signatures from the players who could eventually find themselves starring on a MLB team.

Autographed Jersey and Patch cards are inserted at least two per box. Pure Autographs, which are made with a clear plexiglass-like material, fall one or more per box.

Production of 2015 Leaf Perfect Game National Showcase Baseball is 99 cases. This is half as many as last year. Each case has 15 boxes.