Connor McDavid–you may have heard of him. That is unless you have been living under a rock.

If you’re tuned into hockey, then you were probably well aware of McDavid during his amateur career. But for the sake of argument, let’s start with the 2015-16 NHL season when he made his on-ice debut for the Edmonton Oilers. Looking back, collectors were basically chomping at the bit waiting for 2015-16 Upper Deck Series 1 to hit the market as the hunt for McDavid’s first Rookie Card was set to begin. 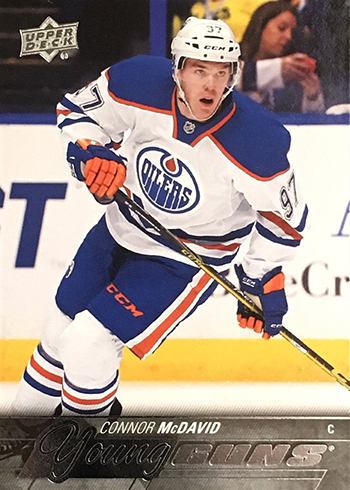 And what a hunt it was.

Card number 201 came flying out of packs, into sleeves and top loaders (some even to Beckett Grading if you happened to be at the Sports Card and Memorabilia Expo that fall), and directly onto the secondary market. It was like sharks in a feeding frenzy. There was blood in the water and you did not want to be left out. McJesus was finally here to save the hockey card market and atone the sins of the less-than-stellar rookie classes of years past.

Fast forward to the 2017-18 hockey season and Upper Deck hit pay dirt again when the 2015-16 Upper Deck Connor McDavid Young Guns Rookie showed up in 2017-18 SP Authentic in the form of a limited buyback autograph numbered to 97. 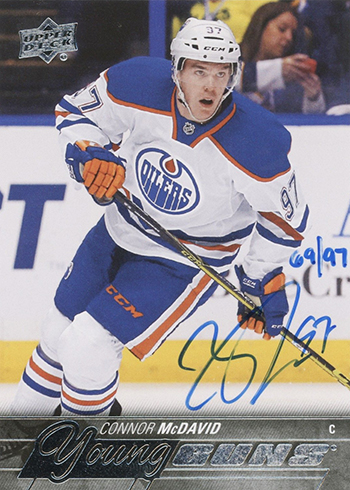 The secondary market has, yet again, scrambled to get their hands on one of these highly sought after versions.

The price it’s commanding should be no surprise considering how hot they were the first time around. If you are looking at trying to pick one up be prepared to shell out about three stacks, and I’m not talking about one half of Outkast. It’s starting at around $3,000.

Even though that’s a lot, if McDavid continues to shine like the star he is, you can expect for that price to climb.