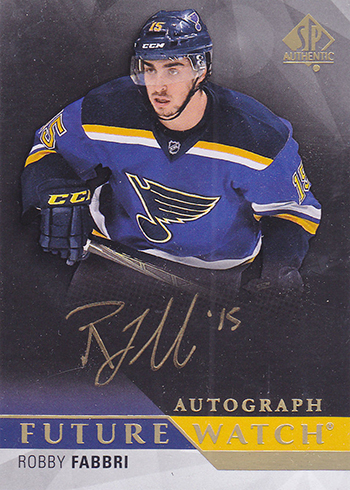 Not everything on the 2015-16 SP Authentic Hockey checklist was noted up front. As has been the case for the past couple of seasons, Upper Deck has slipped a couple of surprises into the mix.

While one isn’t unexpected as it sticks with what they’ve done in previous years, a new level of Future Watch autographs are new.

First up are the rookie autographs. Select Future Watch cards already had some parallel versions with lower numbering and the addition of patch. 2015-16 SP Authentic Black Gold Ink Future Watch Autographs are now in play as well.

The cards aren’t serial numbered so quantities aren’t known. With only a couple surfacing on eBay on the set’s release day, it’s safe to say that they’re on the rare side as well. Upper Deck doesn’t usually release print run specifics for unnumbered cards, particularly their surprises.

While technically a surprise in the notion that they weren’t mentioned up front or noted on the checklist Upper Deck released, Acetate Young Guns are also lurking inside 2015-16 SP Authentic Hockey packs. These cover the rookies in 2015-16 Upper Deck Series 2. That release had the Series 1 Acetate Young Guns. 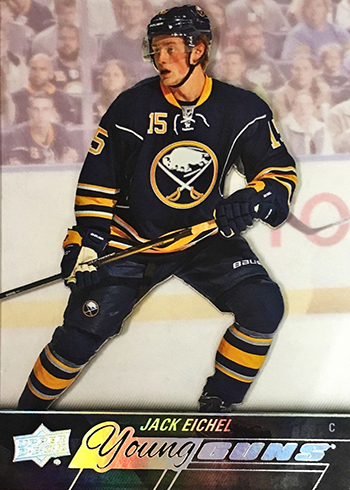 Acetate Young Guns are exactly as they sound. They recreate the cornerstone rookie cards on the clear, plastic-like stock and with a different photo. The surprise cards debuted in 2013-14 and have become regular parts of Upper Deck Series 2 and SP Authentic ever since.

Like the Gold Ink Future Watch cards, insertion rates and print runs for the Acetate Young Guns are not known. That said, they are tough to pull.

Here’s a list of the 2015-16 SP Authentic Black Gold Ink Future Watch Autographs spotted thus far (consider this a running list that will be added to).

Here’s Why Kids Matter to the Hobby