A copy of the 1997-98 Metal Universe Precious Metal Gems Green Michael Jordan has made its way to eBay. And it didn’t take long for the card to pass the $100,000 threshold. 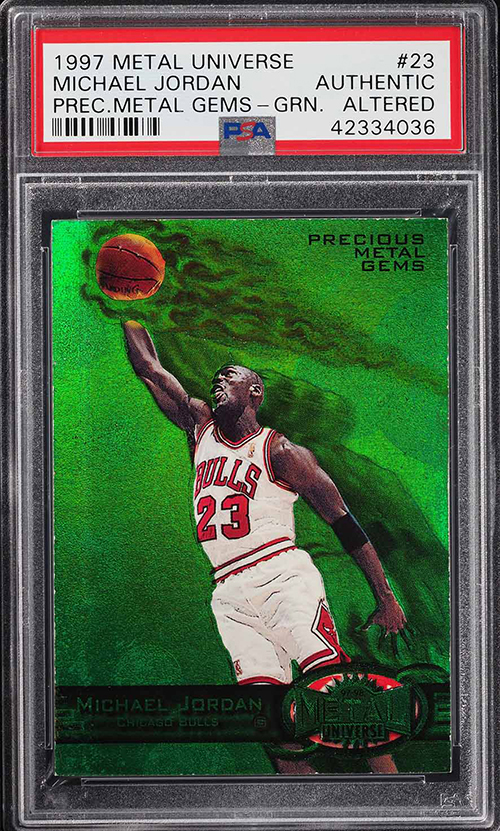 The card has just ten total copies and is considered to be one of the most desirable Michael Jordan cards of all-time.

This particular copy has been inspected by PSA but it doesn’t have a grade. Rather, it’s encased as being ‘altered.’ To some, that might make the early price even more surprising. But it’s a testament to the card’s popularity as well as the set it comes from.

1997-98 Metal Universe Basketball has the sport’s first Precious Metal Gems cards. They’re a parallel of all the base cards except for a pair of checklists (123 total). Backs have a serial number out of 100. But that covers two versions of the card. PMG Green cards are the first ten copies. The remaining 90 have red foil backdrops. This Jordan is card ‘006 or 100.’ 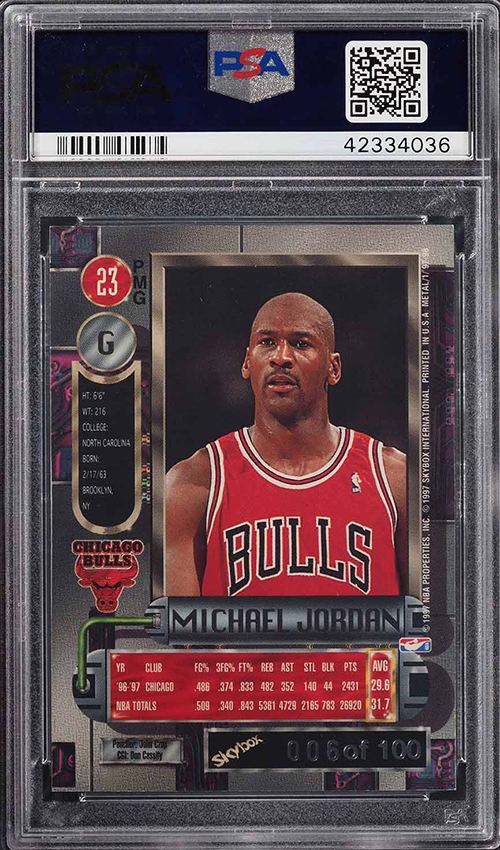 PMGs have taken on a few forms over the years, branching out into other sports and even non-sport. But this is the version that has been the most influential. The bright colors are unmistakable. The foil finish also makes them prone to damage.

No matter the condition, these PMGs are a benchmark for tough parallels from a time when rainbows consisted of only a couple of cards.

This particular copy of the 1997-98 Metal Universe Precious Metal Gems Green Michael Jordan was originally listed on eBay a couple of days earlier. Within a few hours bidding topped $500,000. But concerns over the legitimacy of some of the bids led to PWCC, the consignment seller offering the card, to pull the listing and reschedule it.

Now all prospective bidders for the card must be pre-approved.

The last sale of a 1997-98 Metal Universe PMG Green Michael Jordan was in 2015. Baseball Card Exchange originally listed card 001 of 100 on eBay where bidding closed at $91,300. However, that sale was not completed. The company ended up selling it privately for, according to a press release, “a small six-figure sum.” That copy did not receive a grade from PSA but was labelled “Authentic.”

This isn’t the only 1997-98 Metal Universe PMG Green cards listed through PWCC right now. Besides the Jordan, there are five others, four of which currently have bids over $5,000. This is also despite the fact that none of them are graded higher than PSA 6. Leading the way is a PSA 6 Tim Duncan (his rookie year) at $17,000 and a PSA 6 Scottie Pippen at $6,800. 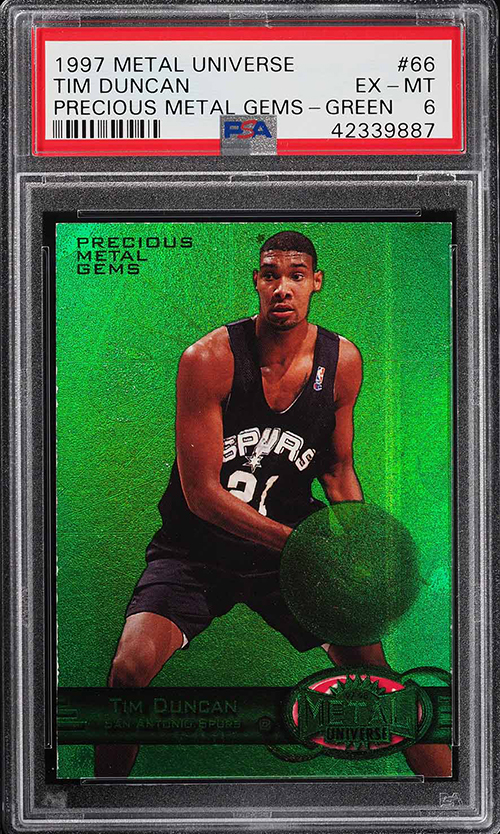 The 1997-98 Metal Universe Precious Metal Gems Green Jordan, along with the five others, all close on Wednesday, February 20.