Back in the ’80s, trading cards were still, by and large, kids stuff. This was especially true when it came to entertainment sets based on movies and TV shows. So it might seem strange that the Rambo franchise made its way into the wax pack realm. 1985 Topps Rambo: First Blood Part II trading cards tackle the R-rated action classic. 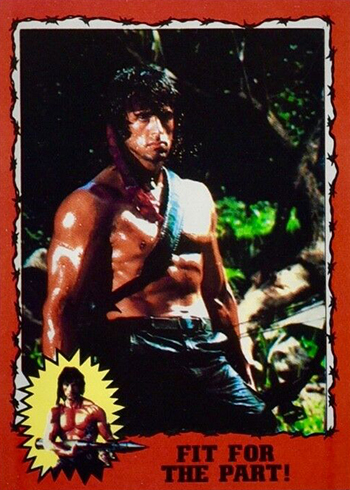 The main set is on the small side with just 66 cards. But there’s plenty of Sylvester Stallone and his iconic character. There’s also crossbows, bazookas, big knives, massive explosions, looks of despair and moments of victory. Needless to say, it’s not your typical set of 1980s trading cards.

But as the years have passed, John Rambo is now a bigger part of popular culture than just a really violent film that kids watched while their parents were sleeping or at loosely supervised weekend sleepovers. But even then, the perception — or rather the marketing — of the Rambo character was changing. The following year, John Rambo became a cartoon complete with action figure line. So maybe trading cards aren’t really that much of a stretch.

1985 was also the year that Topps introduced Garbage Pail Kids to the world. So kids stuff definitely had some edge in the world of trading cards at the time.

The base cards boast a design that fits with the movie’s action sensibilities. Fronts showcase a crimson borders and a barb wire inner frame. The iconic key art of Rambo with a bazooka at his side sits in amidst a yellow explosion in the corner. While you’re not going to find much gore on the cards, there is no shortage of action. 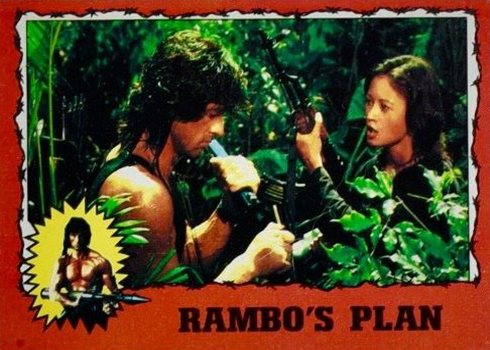 Backs bring back the key art from the back and offer up a short synopsis. Basically, it’s your standard ’80s Topps non-sport set. 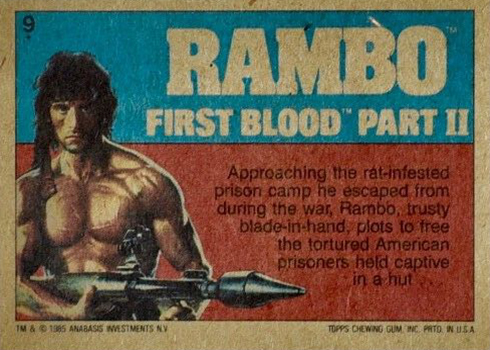 That means stickers as well. Landing one per pack, there are 22 in the set. Like the main card set, these are action-focused. With thick yellow borders, not only are they bright but they hearken back a few years to another Stallone sequel Topps did a set for, 1979 Rocky II. 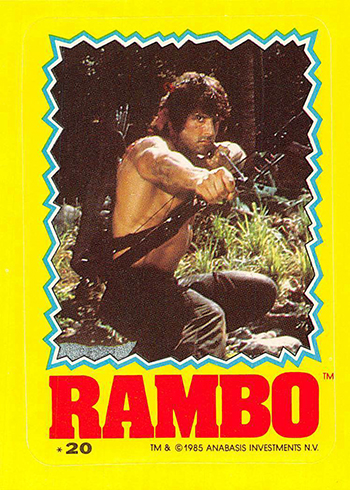 Although not rare, 1985 Topps Rambo First Blood Part II trading cards aren’t the most common set out there. You can find them today, particularly in set form, but not in huge numbers. Landing singles to fill in gaps may be especially challenging.

Packs and boxes also pop up online but, again, the availability isn’t massive. It’s normal for boxes to have a black mark across the front. This is common from the era as it simply indicated returns sent back to the card maker.

Because Rambo continues to be popular — and likely the fact there isn’t a ton out there compared other sets out there — prices have held steady. It is a non-sport set without a lot of frills, so it’s not wildly expensive. Just don’t expect to find closeout prices, though.

Don’t be surprised, though, if unopened boxes and packs start to rise. It’s a steady trend with non-sport products from this era and it’s going beyond just Star Wars and Garbage Pail Kids. 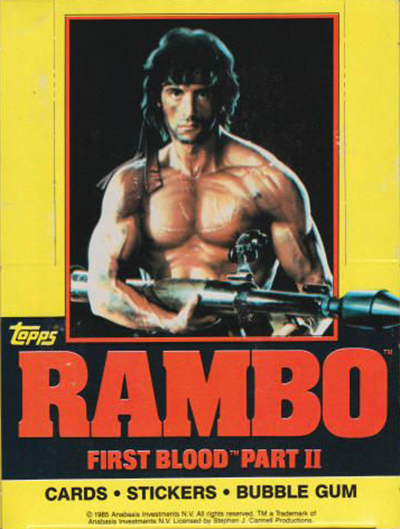 While the 1985 Topps Rambo set is the primary place to find trading cards of Sylvester Stallone’s iconic films, others do exist.

These include some autographs in 2013 Topps 75th Anniversary. The first, and most common, is part of the product’s main autograph lineup. Julia Nickson, who played freedom fighter and love interest Co, signed for the set. 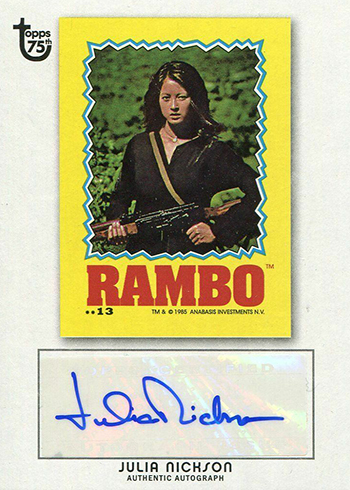 Sylvester Stallone autographs are also in the product, although in small quantities. Topps had the actor sign some of the original 1985 cards. These have a special stamp and a 1/1 serial number to differentiate them from an in-person autograph. 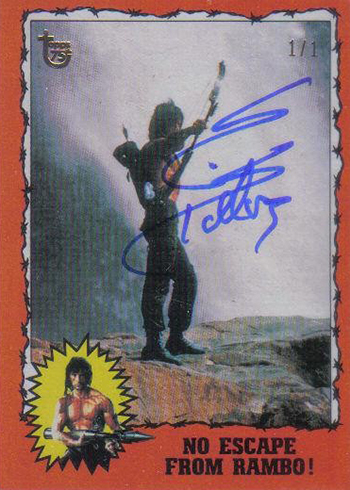 2018 Topps 80th Anniversary Wrapper Art is a print-on-demand set available through the company’s website. Each card, which is base on a pack, was available for just one week. Rambo came up about a quarter of the way through the set’s run, coming in at #32. It sold 232 copies, roughly average compared to other cards on the checklist. 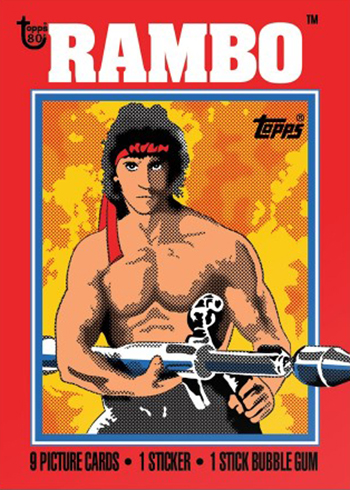 Technically they’re not trading cards, but in 1986, Panini released a sticker collection based on the Rambo: Force of Freedom cartoon. The show lasted just one year, spanning 65 episodes. The complete set has 240 stickers. An album is also available to hold the stickers. 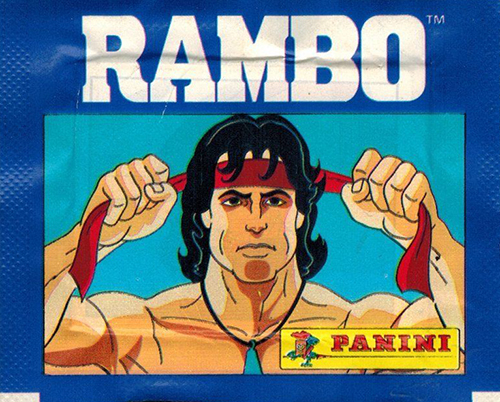 If you want to really dive deep into Rambo trading cards, you can go into the spoof realm. 1991 Topps Wacky Packages mashes up John Rambo with Bambi for a Bambo sticker. It has two different versions, depending on what’s on the back. One’s a puzzle piece while the other has a coupon. 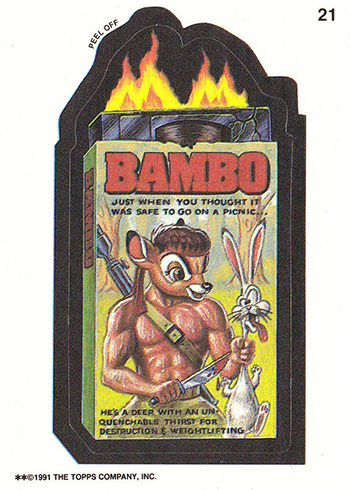 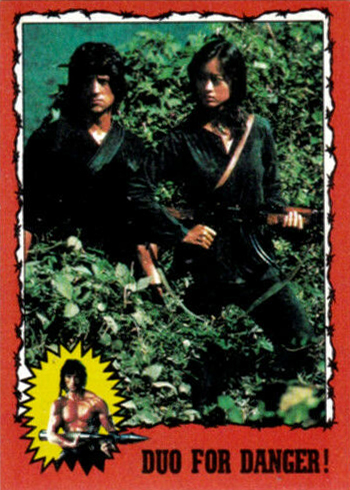 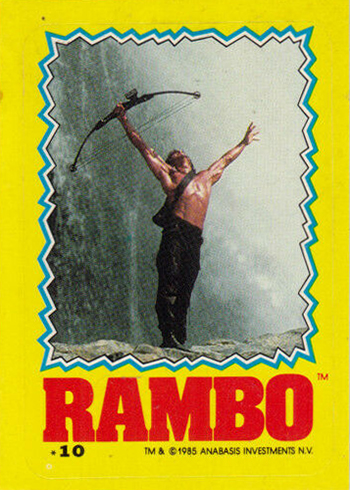