1977 Topps Star Wars UK trading cards have a sense of familiarity about them. The early part of the checklist is virtually the same as the much more common — and iconic — American versions. But similar doesn’t mean”the same.”

Instead of five sets like in the United States, 1977 Topps Star Wars UK has just two. The first one is virtually the same with 66 cards and the blue starfield design. The checklist matches the American one as well. 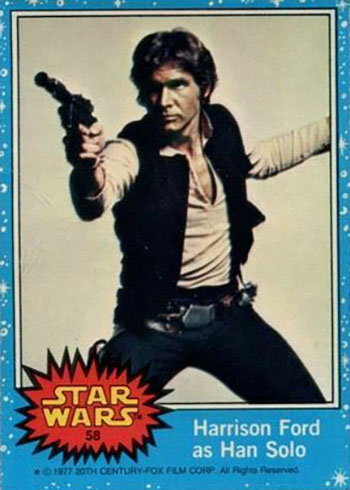 It’s in Series 2 where things change. At first glance, things may seem the same. The cards largely are. But it is different and in a couple of significant ways. The easiest way to tell is with the card numbers. They start again from #1 and also have an ‘A’ at the end (#1A-66A). The card order doesn’t match with its American counterpart, either. The images and captions match overall, it’s just like the cards have been shuffled. 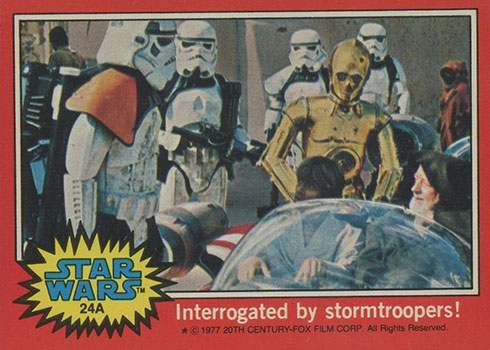 Spotting the Differences Between UK and American Cards

1977 Topps Star Wars UK trading cards, which were manufactured by Topps Ireland, have a couple of other differences on the production side. Card stock is a brighter. This is especially evident on the text-based card backs where the UK cards are much more white compared to the brown of the American versions. 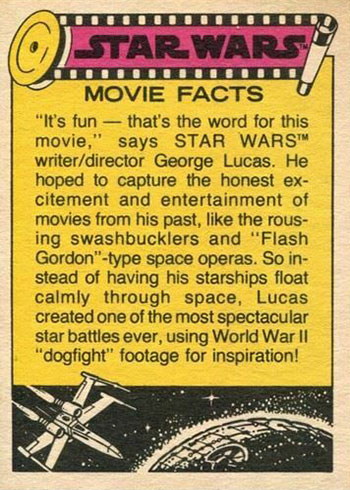 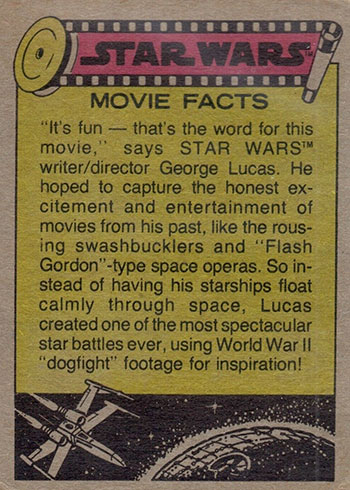 The quality of the UK cards isn’t always the best, though, with rough sides being a common issue, similar to what you’ll find with a lot of Canadian O-Pee-Chee cards. 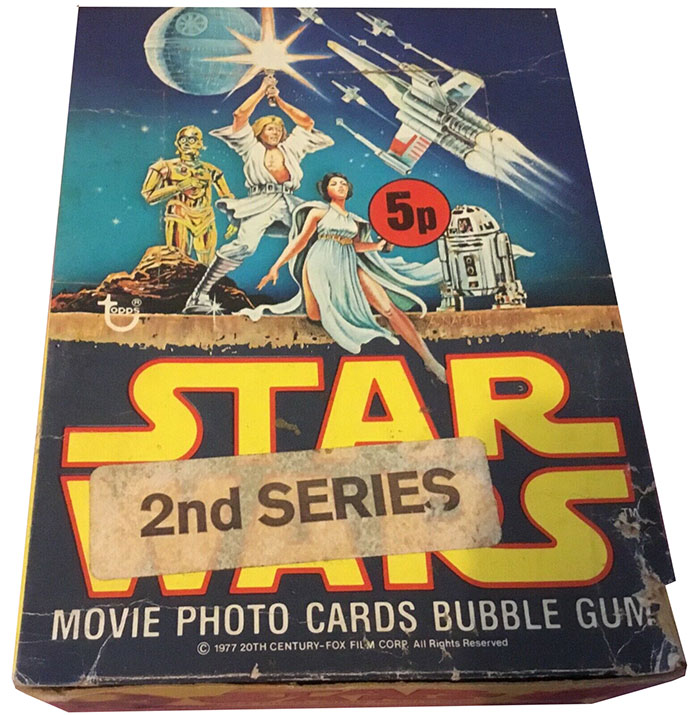 This set has no stickers to go with the base cards.

1977 Topps Star Wars UK cards are fairly scarce today, particularly in top condition. As a result, prices can be equally high. They are out there, just not in big numbers like a lot of other original Star Wars trading cards.

Wrappers have the same artwork and layout as the ones found in the United States. However, there are some minor but easy-to-tell differences. 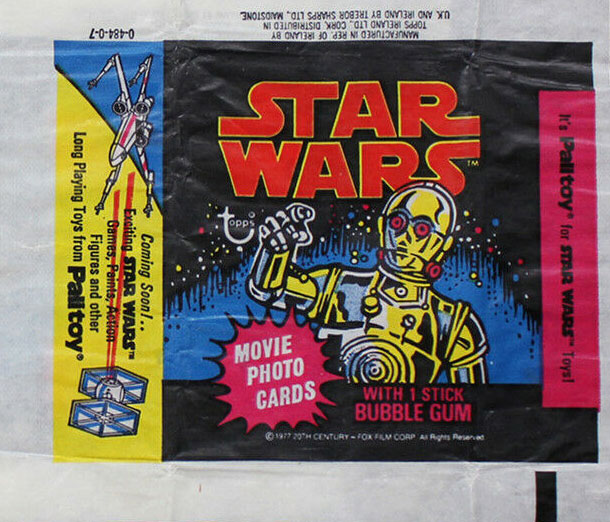 For starters, because there are no stickers, there’s no mention of them. The copyright info has info for Topps Ireland.

Instead of adds for Kenner toys, UK wrappers have Palitoy. 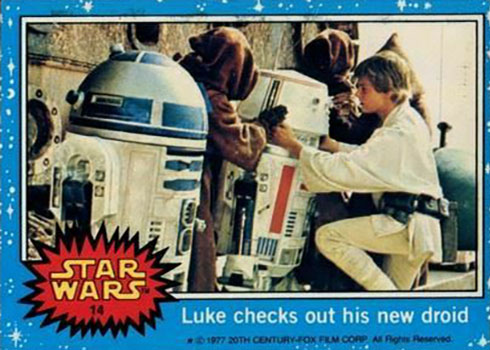 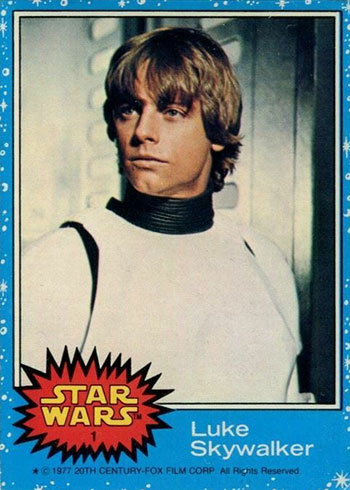 23 C-3PO is injured
24 Stormtroopers seek the droids
25 Luke rushed to save his loved ones
26 A horrified Luke sees family killed
27 Some repairs for C-3PO
28 Luke agrees to join Ben Kenobi
29 Stopped by Stormtroopers
30 Han in the Millennium falcom
31 Sighting the Death Star
32 Lord Vader’s Guards
33 The droids in the control room
34 C-3PO diverts the guards
35 Luke and Han as stormtroopers
36 Blast of the laser rifle!
37 Cornered in the labyrinth
38 Luke and Han in the refuse room
39 Steel walls close in on out heroes!
40 Droids rescue their masters!
41 Facing the deadly chasm
42 Stromtroopers attack
43 Luke prepares to swing across the chasm
44 Han and Chewie shoot it out

45 The light sabre
46 A desperate moment for Ben
47 Luke prepares for the battle
48 R2-D2 is loaded aboard
49 The rebels monitor the raid
50 Rebel leaders wonder about their fate!
51 C-3PO and Princess Leia
52 Who will win the final Star War
53 Battle in outer space
54 The victors receive their reward
55 Han, Chewie, and Luke
56 A day of rejoicing
57 Mark Hamill as Luke Skywalker
58 Harrison Ford as Han Solo
59 Alec Guinness as Ben Kenobi
60 Peter Cushing as Grand Moff Tarkin
61 Mark Hamill in control room
62 Lord Vader’s stormtroopers
63 May the Force be with you
64 Governor of Imperial Outlands
65 Carrie Fisher and Mark Hamill
66 Amazing Robot C-3PO 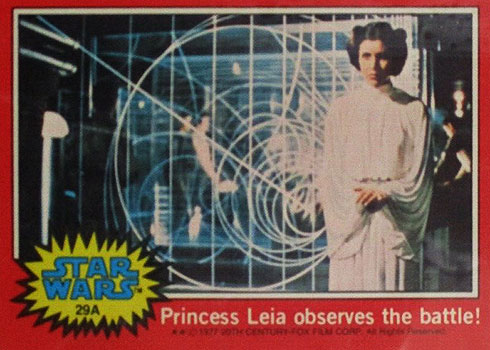 1A Lord Vader and a soldier
2A Luke Skywalker on Tatooine
3A See-Threepio and Luke
4A Luke’s uncle and aunt
5A Honoring the victors!
6A Rebels prepare for the big fight!
7A Luke destroys an Imperial ship!
8A Stormtroopers blast the rebels!
9A May The Force be with you!
10A The Wookiee Chewbacca
11A Solo blasts a stormtrooper!
12A Where has R2-D2 gone?
13A Threatened by Sandpeople!
14A Planning to escape!
15A The Millennium Falcon
16A Stormtroopers guard Solo’s ship
17A Preparing to board Solo’s spaceship!
18A Hiding in the Millennium Falcon!
19A Stormtroopers attack our heroes!
20A Roar of the Wookiee!
21A Spectacular battle!
22A Luke in disguise!

23A Special mission for Artoo-Detoo!
24A Interrogated by stormtroopers!
25A Threepio, Ben and Luke!
26A Imperial soldiers burn through the starship!
27A A mighty explosion!
28A A message from Princess Leia!
29A Princess Leia observes the battle!
30A A daring rescue!
31A The incredible See-Threepio!
32A The Millennium Falcon speeds through space!
33A Chewbacca poses as a prisoner!
34A Our heroes at the spaceport
35A Threepio fools the guards!
36A Ben Kenobi rescues Luke!
37A Ben hides from Imperial stormtroopers!
38A Rebel pilot prepares for the raid!
39A Ben turns off the Tractor beam
40A The imprisoned Princess Leia
41A R2-D2 and C-3PO
42A Chewie and Han Solo!
43A The droids try to rescue Luke!
44A Ben with the light sabre!

45A Darth Vader strangles a rebel!
46A The droids on Tatooine
47A A quizzical Threepio!
48A Sighting Artoo-Detoo!
49A Aboard the Millennium Falcon
50A Weapons of the Death Star!
51A The droids wait for Luke
52A Honored for their heroism!
53A The Tusken Raider
54A Threepio searches for R2-D2
55A See-Threepio
56A The Rebel Fleet
57A Pursued by the Jawas!
58A Luke on the sand planet
59A Threepio’s desert trek!
60A Waiting in the control room
61A Solo and Chewie prepare to leave Luke
62A Meeting at the cantina
63A Han Solo and Chewbacca
64A Droids to the rescue!
65A Artoo-Detoo on the rebel starship!
66A Advance of the Tusken Raider

Oscar-Worthy Card Performances from the Nominees – ...