If you’re a hardcore football fan, you’ve probably got a master list of all the best players available in the 2018 NFL Draft. Barring a Ryan Leaf-ian disaster, you can tell who has the best chance at a Hall of Fame career versus who is going to struggling to catch on with a team beyond the practice roster.

But for some, football starts in September when the first NFL game is played. Rookies mean little unless they’re wearing your team’s colors. Then they get all the love.

And when it comes to football cards, sometimes it takes a little time on the bench and waiting to emerge as a hobby superstar. If your last name is Garoppolo, it can take years. 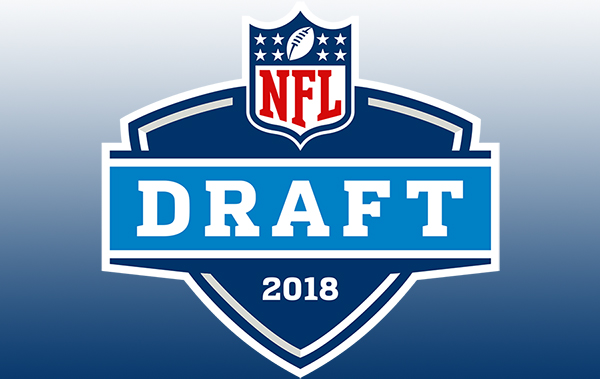 Over the course of the 2018 NFL Draft, you’re going to hear a lot of names. But, to be frank, most of them aren’t going to amount to much when it comes to hobby love. The fact is, quarterbacks get most of the love among collectors with running backs and receivers joining them. Yes, there are exceptions. But they’re just that — exceptions.

With that in mind, here are 11 names you’re likely to hear about in the months ahead as football gears up for the 2018 season and the cards follow. 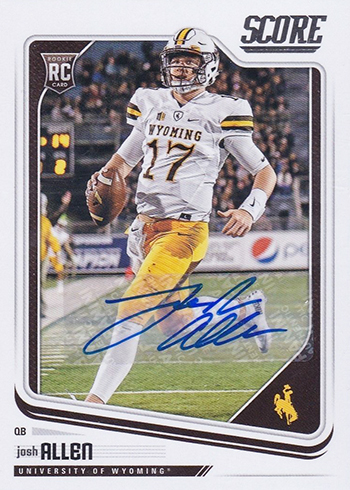 In a year where several quarterbacks are looking to make a splash as rookies, Josh Allen is one of the keys. He’s also one of the more controversial (that’s without taking his ugly high school tweets into account). Some are high on Allen because of his arm strength. On the other end of the spectrum, some make the case that he could be an NFL bust, pointing to his low percentage of completions. Which one will be correct? That’s part of the fun of prognosticating. 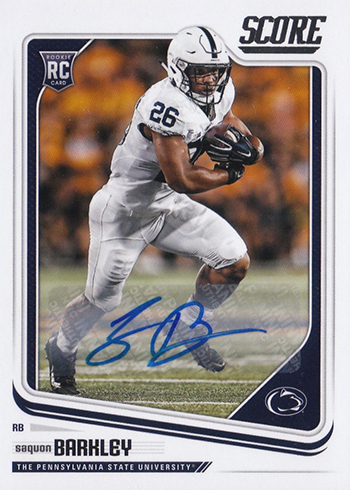 Saquon Barkley was a dominant force for Penn State’s offense in 2016 and 2017. The running back was the Big Ten’s Offensive Player of the Year in back-to-back seasons. At the school level, he’s the second leading rusher in Nittany Lions history (less than 100 yards behind all-time leader Evan Royster). Barkley’s 43 rushing TDs are a Penn State record.

Panini signed the standout to an exclusive autograph deal. That means their products are the only place to find his signed cards. 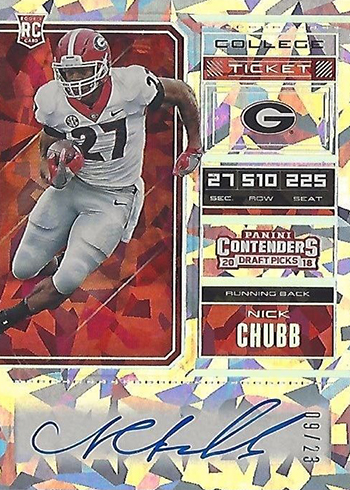 Nick Chubb finished his college career sandwiched between some elite company at the top of the University of Georgia’s list of all-time rushing leaders. While he couldn’t match Herschel Walker’s Bulldogs record of 5,259 yards, Chubb sits second and just ahead of Todd Gurley.

Among Chubb’s playing highlights were a pair of touchdowns in the 2018 Rose Bowl, which helped propel Georgia to the National Championship Game. 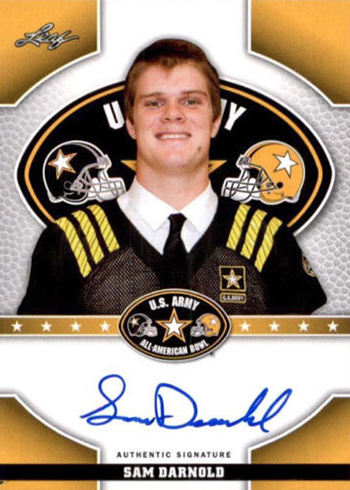 To many, Sam Darnold is the quarterback with the most potential in the 2018 NFL Draft. By now, he should be used to high expectations. Darnold was USC’s starting quarterback for two seasons. He led the Torjans to the 2017 Rose Bowl. In the process, he threw for 453 yards, the second most in the game’s long history. Darnold also appeared in the 2017 Cotton Bowl Classic, although it was in a losing effort as USC lost to Ohio State.

As far as Sam Darnold cards go, they date back to 2015 Leaf Army All-American Bowl. This includes autograph cards signed while he was still in high school. 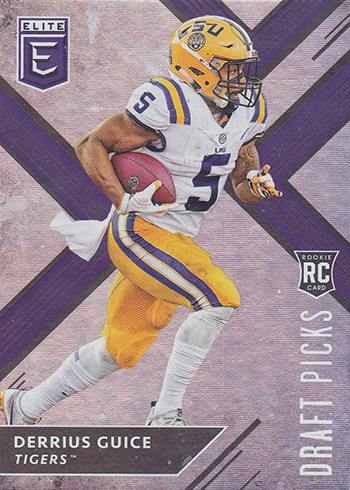 With Derrius Guice, it marks the second year in a row that LSU has produced one of the top rushing prospects in the draft. Guice follows Leonard Fournette in 2017. Guice’s college numbers weren’t quite as strong as his predecessor’s, but part of that was due to being slowed by injury last year. That didn’t stop Guice from skipping his senior year and making the jump to the NFL.

Guice is another player with Leaf Army All-American cards from several years prior. He’s part of the 2015 set, including autographs. 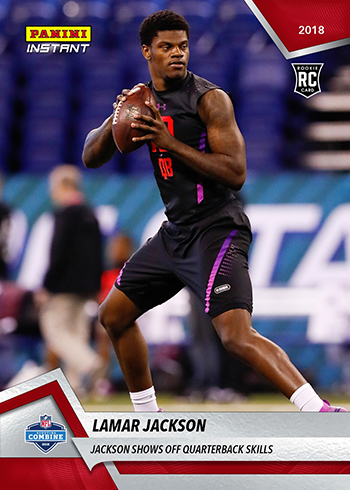 As the 2016 Heisman winner, no matter what happens in the years ahead, Lamar Jackson will be part of the hobby world for years to come. But there’s a good chance it’ll be more than just his college career that gets collectors interested. But that might not be apparent right away. His unconventional approach to some of the NFL’s traditions — like skipping the 40-yard dash at the Combine — could result in some teams skipping over him and going with one of the many other top-rated quarterbacks in the draft. 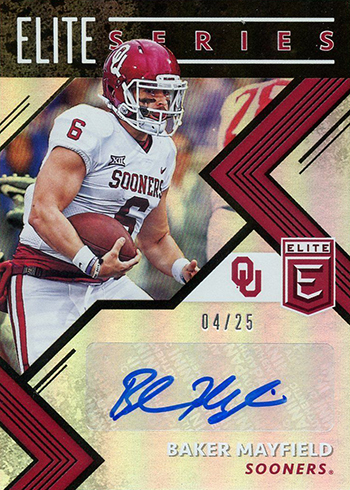 A lot of drama has followed Baker Mayfield over the past few years as he went from walk-on at Texas Tech to the 2017 Heisman Trophy in Oklahoma. Mayfield’s journey to the NFL has been longer than most. Not only did he play through his senior year but he sat out 2014 because of the NCAA’s transfer rules.

He led Oklahoma to three straight Big 12 titles and helped the Sooners to the semifinals as they vied for a National Championship in 2017. 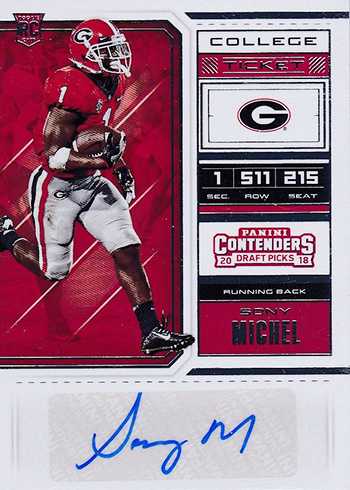 Sony Michel is the second member of the Georgia backfield to watch in 2018. Although his 1,227 rushing yards in 2017 were impressive, it was Michel’s play in the 2018 Rose Bowl that got him even more attention. Michel scored three touchdowns and notched 181 yards in the Bulldogs’ win.

Michel’s first cards and autographs date all the way back to 2011 Leaf Army All-American Bowl. 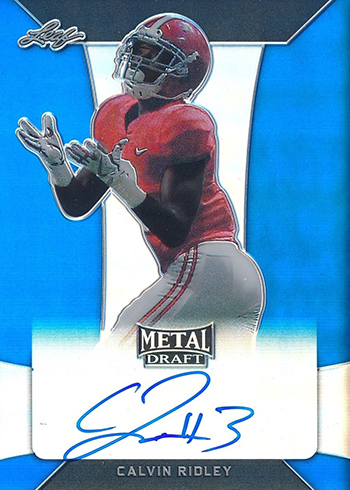 Calvin Ridley enters the NFL as one of the greatest receivers to ever suit up for the Alabama Crimson Tide. He finished as the school’s second all-time receptions leader, second in touchdowns and third in receiving yards. Ridley may not be one of the most talked-about offensive prospects in the draft but neither was Odell Beckham Jr., who was the third wide receiver taken in the 2014 draft. 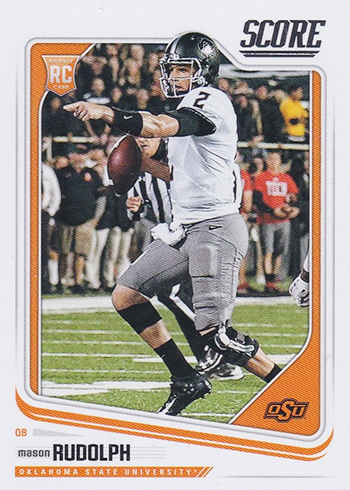 Although several quarterbacks are expected to be among the top rookies in 2018, Mason Rudolph isn’t necessarily at the forefront of a lot of the conversations. Despite not being one of the elite football schools in the country when it comes to QBs, Rudolph still enters the NFL as Oklahoma State’s all-time passing yards and passing TD leader. Depending on where he ends up, it could make him a bit of a sleeper when it comes to cards. 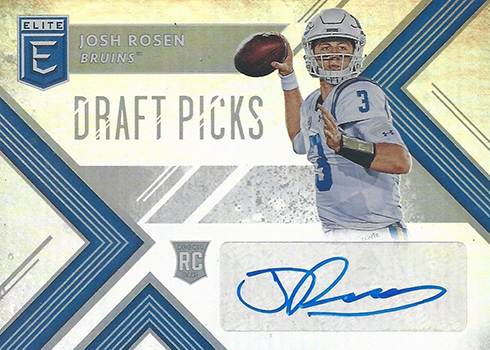 There’s more than one quarterback named Josh among the top 2018 football card rookies. Like Josh Allen, Rosen has good arm strength. But his outspoken nature has already caused some stir. Should that continue, it’ll only be amplified on the NFL stage and make him even more polarizing. Rosen set a single-season record for passing yards in his final season at UCLA. His 3,756 edged out Brett Hundley’s 2012 total of 3,740.