He was one of the best and most beloved players of his generation. So it’s understandable why Dale Murphy cards remain popular today. Beginning with his 1977 Topps Rookie Card and continuing through to today, there are thousands of different Dale Murphy cards to choose from. 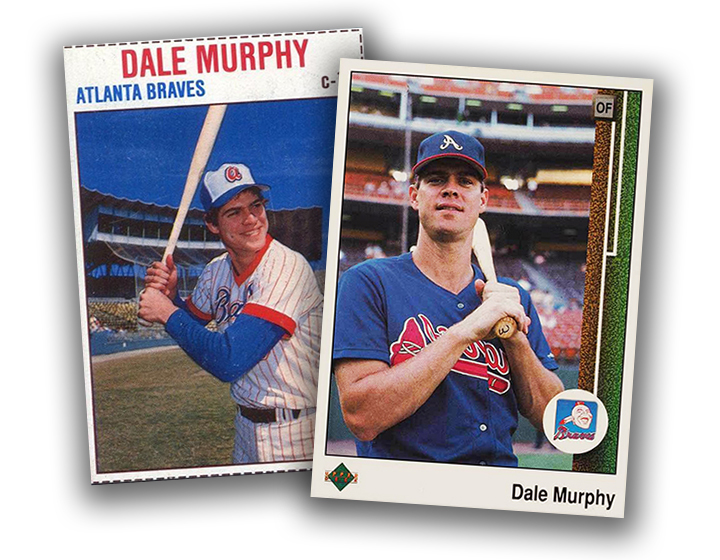 Murphy was one of baseball’s best players in the 1980s. The National League MVP in both 1982 and 1983 while with the Atlanta Braves, the outfielder was also a seven-time All-Star and winner of five Gold Gloves.

And while his on-field accolades made Murphy a big name in them game, it was he gracious attitude and personality that made him beloved by so many fans. Even in retirement, that continues still today.

For the most part, Dale Murphy cards remain affordable. There are some exceptions with some of his rarer releases and modern, high-end cards, but not a lot.

With that in mind, here are ten great Dale Murphy cards, focusing primarily on releases from his playing days (with a couple of more recent exceptions).

Any list of Dale Murphy cards needs to start with his Rookie Card. Like most players from his era, Murphy is not alone on his first card. And similar to the vast majority of multi-player RCs, not all turned out to have similar careers. Murphy is is clear standout here. It’s not an overly attractive card and it’s not too expensive, either. It’s worth noting that Murphy was on another “Rookie” card in 1978 Topps. However, for him, it’s his second-year card. 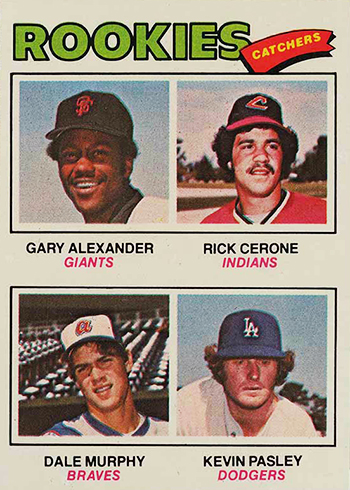 The 1970s and ’80s brought with them a lot of oddball cards. This second-year Dale Murphy card, which is sponsored by both Coca-Cola and the radio station WPLO, is a regional card. The black-and-white artwork makes it immediately stand out. It’s a card that might take a little work to find but shouldn’t be impossibly rare to track down or overly expensive. The 1978 Braves Coke set is slightly oversized, measuring 3 by 4 1/4 inches. 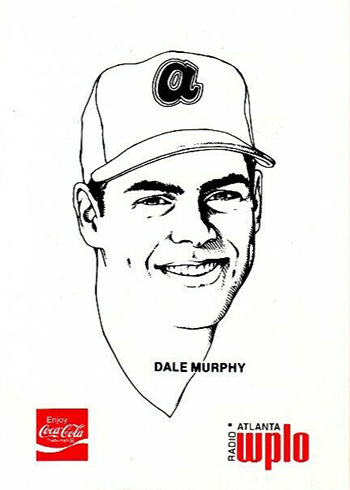 Not all food-issue cards are regional. 1979 Hostess Baseball took things national with a large 150-card set. Attached to boxes on the company’s snacks in three-card panels, cards had to be cut out. So without a steady hand, edges could easily get a little touch. Also included on Murphy’s panel are Jon Matlack and Bruce Bochte. This is one of the tougher years for Hostess baseball cards. 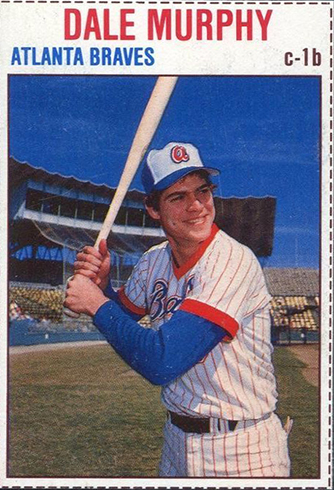 1988 Topps Cloth Baseball is one of those sets that doesn’t exist but does. Never formally released, a very small number of the cards have made their way to the secondary market over the years. Likely an experiment, the idea behind them is that when put in water, they become sponge-like. That probably explains why they never made it past the planning stages. The checklist takes from the main 1988 Topps Baseball checklist, although just different cards are known to exist. Murphy doesn’t appear on his own card, although he is pictured alongside some of his Atlanta teammates on a Team Leaders card. This is easily one of the rarest Dale Murphy cards released during his career. 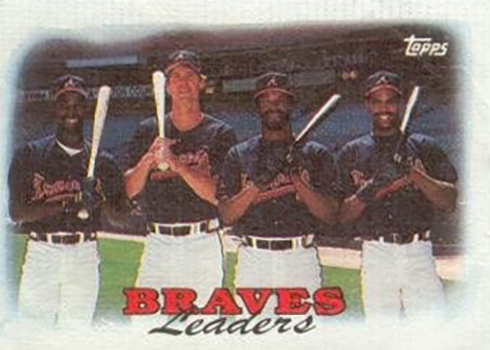 A strong argument could be made that the 1989 Topps Heads Up Dale Murphy isn’t exactly a baseball card. However, we’re still going to include it given the close connection to the hobby, including random packaging for players. Plus, it’s probably sitting on a lot of Dale Murphy wantlists given how scarce it is. 1989 Topps Heads Up is a test issue that got a very small release. A precursor to today’s big heads, the idea was that the faces could be hung up in lockers and on windows with the attached suction cup. 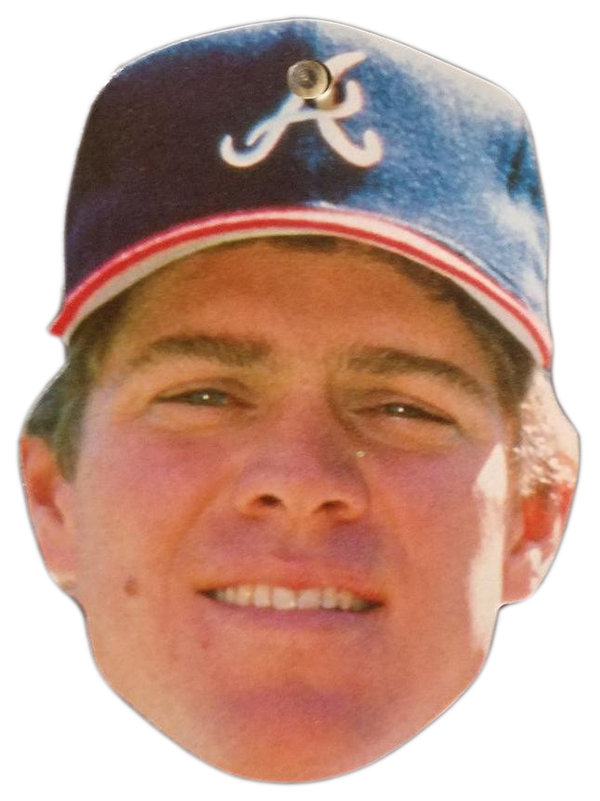 Perhaps the most notorious Dale Murphy card, his initial appearance in 1989 Upper Deck Baseball came with an error that’s on the subtle side — until you see it. It’s flipped. The card was fixed and the corrected version is much more plentiful. According to Upper Deck, two percent of the cards have the reverse image error. This sent prices soaring back in the day. They may not be in the same place today, but it’s still one of the set’s most popular cards not named Griffey. For one Dale Murphy superfan, the card also made for a unique autograph opportunity. 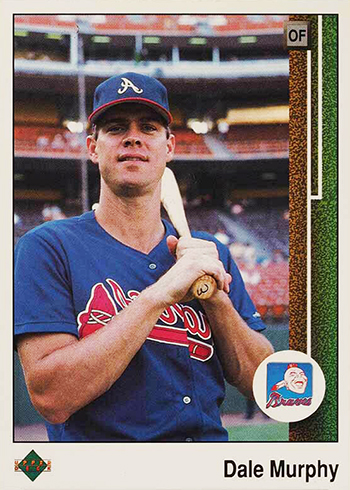 Decades later, 1990 Donruss Aqueous Test cards are still something of a  mystery. A spin on regular 1990 Donruss Baseball cards, these have Aqueous Test printed across the back and use a special gloss coating. No matter how they came to be, the cards are out there and they’re incredibly scarce. It’s one of the White Whales of Dale Murphy cards.

Today, there’s no shortage of Dale Murphy autograph cards. However, Fleer’s 2000 Greats of the Game was the first to get that picturesque penmanship onto a certified cards. One of the sport’s early retired player line, at as far as the modern hobby goes, it’s a very affordable card today as the number of high-end releases continue to raise the bar. Inevitable or not, there is still a distinction here of first. And it’s an attractive card to boot. 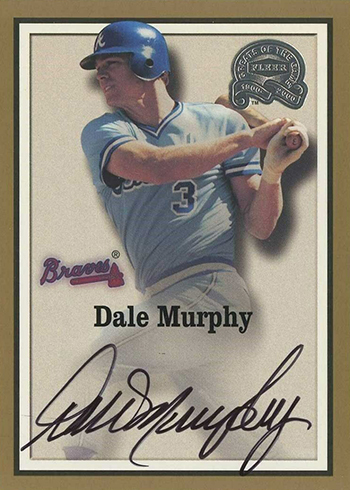 When it comes to super premium Dale Murphy cards, 2016 Topps Dynasty has to rank at the top. His autograph patch cards in the product all have on-card signatures and a jumbo swatch. Murphy has four cards in the set, all with different photos and slightly different card numbers. Murphy doesn’t have a lot of patch cards, particularly at this size. 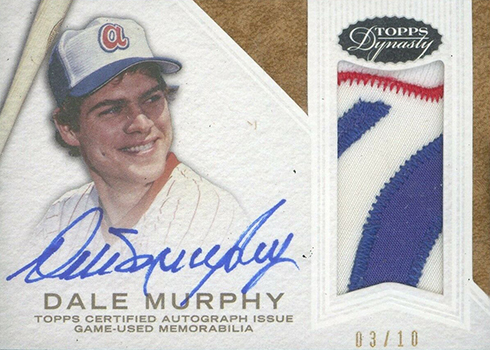 There’s a lot of Atlanta Braves history on this card. Murphy is joined by a pair of Hall of Famers, Chipper Jones and John Smoltz. Autographs and memorabilia pieces from all three are included. Whether it’s the base version or its handful of parallels, none have more than 36 copies. 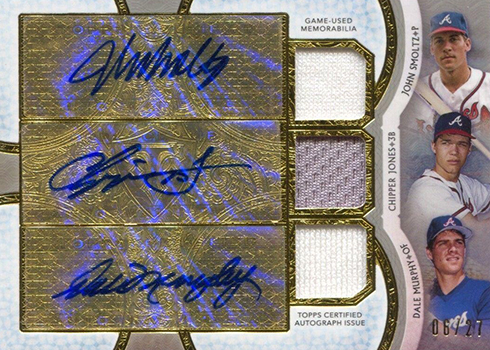 Expect a Cooperstown Bump, but How Much?